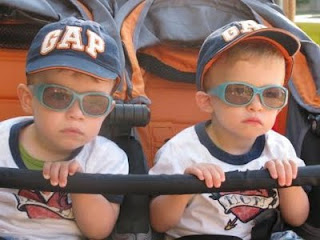 Most days of the week the boys and I head out for our morning walk. I try to get out of the house by 8:15 and we get back around 9am. Somedays I don't say much and use the time to hear myself thing. But other times I use the walk to try and show them new things and teach them new words.

Here they are as we head out. All summer they have loved wearing their "GAP" hats. But they wouldn't wear their sunglasses. Well, on this day, they decided they had to wear their glasses. Aren't they just adorable??? 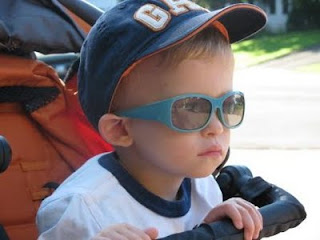 Doesn't Daniel look oh so serious in this pic? He's probably checking all the "cucks" (i.e. trucks) in our neighbourhood. The neighbours are doing renovations so there has been lots of activity on the court these days. 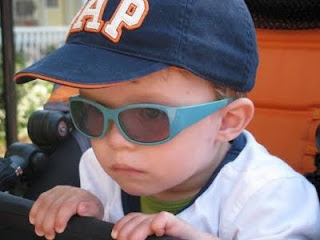 Ben looks almost sad in this photo. I'm not sure why...but he's totally cute though.

(Just a side note...early in the spring he couldn't sit up in the stroller and would just lie back in it. To get him more straight up and able to see the world, we used to put a rolled up towel behind him. But he doesn't need that anymore, he sits up nice and tall and checks out the world. Just another sign of how far he's come.) 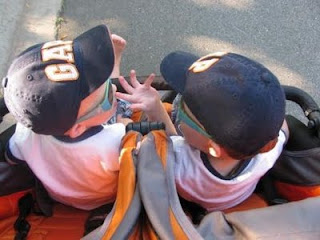 I'm not sure what they're "talking" about in this photo but it was just too cute to leave out. Ben is on the right and obviously explaining something to Daniel. 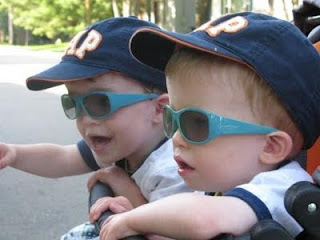 At this point in the walk, they have found something that has piqued their interest. They are freaking out here (although Daniel doesn't look like it here). I decided to take a picture of this thing of interest... 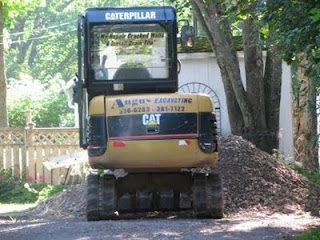 A digger!!! How exciting! They were just thrilled to see this on our walk. But they were confused why it wasn't doing anything. So they then kept saying "stuck". And I agreed. Yes, it must be stuck and that's why it's not doing anything. 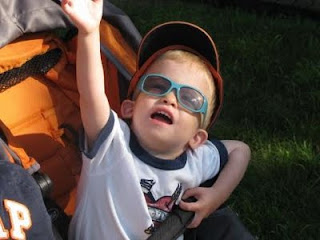 On this walk, I taught them what the sky is. I explained that's where the birdies and the airplanes are. A plane actually flew overhead and Daniel is pointing to the sky and saying "sky" in this shot. 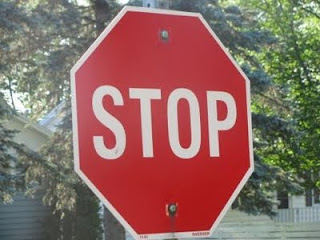 I also took the opportunity to teach them what a Stop Sign is. They were quite excited and kept saying "top"... and for the rest of the walk, when we came across one I would do an exagerrated stop at each one. They loved it. 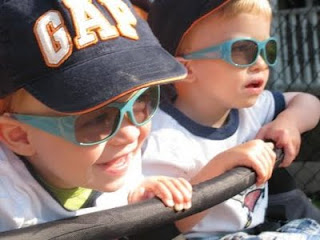 And here they are at the end of our walk. We got home just as our nanny was arriving and as you can see, Ben was very happy to see her.