I've been suffering from a bit of Mommy-guilt lately. You know the guilt that you're not doing everything you should for your kids? One such thing that has been causing this guilt is that my kids don't do a lot of the "typical" kid things. Like playing outside in the snow.

Mostly this is because it's so freakin' difficult for Ben to play in the snow (not difficult for him...he loves it...difficult for us). But another reason is that I really don't like playing out in the snow. I kind of an indoor girl. And my husband really isn't all that outdoorsy either, unfortunately.

However, we built an awesome huge deck last summer and it's turned out to be a great place to play in the snow. Over the holidays, we had a few snowstorms and I would just bundle the kids up and send them out on it while hubby was shovelling it off. He bought them a few kid-size shovels and they were in snow-heaven. And it wasn't even all that difficult for us. Ben really didn't mind crawling around out there. It's so nice and flat on the deck that it works pretty well for him.

Then the idea came to use the ramp off the back as a hill for sliding. So off the nanny went to get a sled and away they went. I will give all credit to this afternoon's sliding fun to her since she was the one doing all the work...carrying Ben up to the top each time.

Here's Daniel going down the ramp: 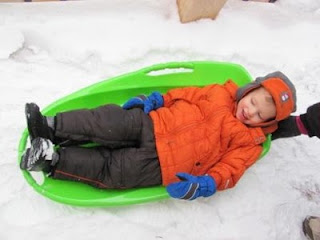 And here's Ben - I can't believe that he chooses to go on his knees..but he loves it! 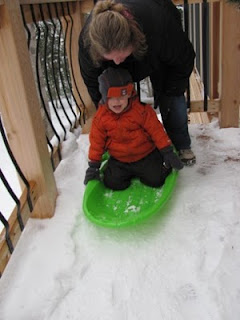 And here's Ben after he fell off! 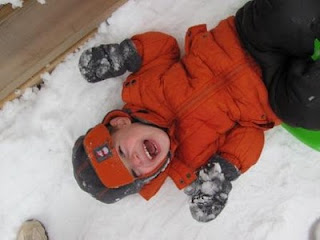