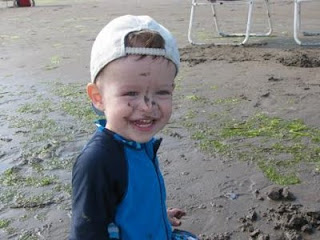 After boring you (I'm sure) in my last post about my weight loss, here's a quick update on Ben and his speech progress.
We've been going to weekly speech appointments since late April / early May. I was concerned because he wasn't talking at all. In early April, he probably had about 5 words. By the end of the month, he wasn't using any and really wasn't repeating much either. I thought maybe it was due to the fact that he was working so hard on gross motor stuff, but wanted to be sure. Plus, he has enough challenges, I didn't want speech to be one of them if it didn't have to be.
So off we went to the speech pathologist, who let me just say is awesome. At first, he hardly said anything or even made sounds. Then he started to copy the signs she was making and then the words just took off.
As I stated a few posts ago, he has somewhere around 25 words now...it may even be closer to 30 or 35 by now.
He did great at his speech appointment this morning. Said lots of words on his own and repeated tons. And he even had one two-word sentence, "bye duck". I was thrilled. And so was the speech pathologist. She's off on vacation for a few weeks so we have a few weeks off. Then she's going to decide how often he needs to come in. Probably nowhere near once a week. YEAH for fewer appointments!
I have to brag about just one more thing. Sorry, I'm a mommy and I just can't help it! Ben was playing with this ball and hammer toy. There are 4 balls (red, blue, yellow and green) and they each go on top in their own "hole". Each hole is coloured to match. After hammering the balls through the toy, he would then place the balls back up in their "holes". Well, he totally amazed me by always correcting himself. He'd place the balls in the holes randomly and then he'd proceed to fix them so that each ball was in the correct coloured hole. It was awesome to watch!
Posted by Cary at 3:08 PM