The deal with Ben (cross-post)

(This is a cross-post from my new blog (a private blog open to my family and friends who want to follow our journey through SDR)).﻿ 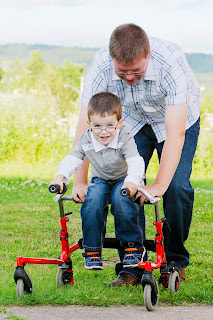 Ben has cerebral palsy, CP for short. CP is an umbrella term used to describe conditions that relate to brain injury that cause problems with movement and posture. CP can affect a person's ability to walk, talk, sit, eat and think. CP is caused by a brain injury shortly before, during or within 3 years of birth.
CP is more prevalent among children who were born prematurely. Ben (and Daniel) were born early at just 30 weeks gestation. That's 10 weeks early. Ben had more trouble as an infant than Daniel did. Both Ben and Daniel had brain bleeds that were found shortly after birth by doing a head ultrasound. Brain bleeds are classified from I to IV, I being least severe. Ben had a Grade II bleed whereas Daniel had a Grade I.

However, just because someone has a brain bleed, that does not mean that a person will absolutely develop Cerebral Palsy. A diagnosis of CP will not be given until the child shows delays in meeting the typical developmental milestones such as rolling, sitting, standing and walking.

The most important thing to remember about CP is that it affects every single person who has it differently. For some with CP, the condition is barely noticeable. For others, it can be so severe that the person relies entirely on others for help with mobility, eating and self-care. Ben is somewhere in the middle. In some ways, I would say that Ben's CP is mild as he can talk, eat, and use his hands. He is also smart as a whip. However, when it comes to walking, Ben's CP is more in the moderate range as he is not completely dependent on a wheelchair to get around but yet is unable to walk without help.

CP affects a person's ability to use their muscles and it does this in different ways. Therefore there are different types of CP including spastic, dyskinetic, ataxic, hypotonic, and mixed. These words all describe HOW CP affects the muscles. Ben has spastic CP. This means that the muscles affected have increased tone or tension.

So, when we describe Ben's type of CP, we say that he has spastic diplegia (meaning tight muscles that affect the legs).

For Ben, having CP has meant that he cannot walk independently. He is able to walk with a walker and with quad canes. Although he is able to walk with these aids, Ben still tires very quickly and walking is very difficult. At home, he crawls to get around. And these days, Ben uses a wheelchair for mobility when we are outside the home.

It is important to remember these things about spastic CP:

I think that pretty much explains it. Here are a few links with more information if you are interested in learning more:

I love to answer questions about Ben...so if you have any, please ask!
Posted by Cary at 7:43 PM