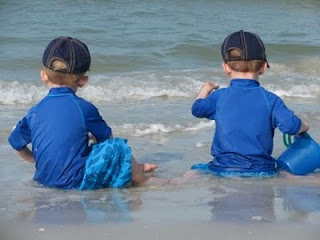 So. We're on our first big family holiday together in Florida. And mostly having a wonderful time. The resort is perfect for us. The pools and beach are really nice and the boys are having a blast. They really are.
But I'm struggling just a wee bit. In our normal life, I have to say that I don't really SEE Ben's disability that much. Yes, we have twice-weekly PT sessions. Yes, we lug his walker everywhere. Yes, I have to be very particular about what shoes I buy him. But his disability just isn't that big of a deal in our regular life.
Our home is very accessible for him. And we only go places that we KNOW will work for him...meaning he can use his walker or we're comfortable with him crawling. We really don't go ANYWHERE where he can't be somewhat independent. It's just no fun. The odd time that we have to go somewhere that doesn't allow him some independence just results in frustration and tears from him...and pretty much the same for us. So we basically avoid places like that.
His disability has been a bit more evident here. It's pretty great at the beach. He's happy to just w-sit in the sand and play with his buckets and shovels. He will do this for hours on end. Yes, I wish he could run in and out of the water like Daniel does, but he's having such a great time, that I don't really think about it much.
The pools though are a different story. At first I thought they were going to be great for him. The main pool has a side where you can walk in. And there is also a kiddie pool that is walk-in and has lots of sprinkler-type stuff. BUT. Yes, but. The bottom of these pools is very rough. You wouldn't really notice it but it is. It's perfect for making the pool non-slip...but far from perfect for a little boy who needs to crawl around on his hands and knees. He played in those pools the first day for a couple of hours. And ended up with very skinned knees and feet. It's 3 days later and they are still looking pretty rough. So that kinda sucks.
Plus, there's this really cute family here that we keep running into. They have 4-year-old boy-girl twins. Boy are they cute. But for some reason they are just serving as a reminder of all that we (and Ben) don't have and can't do. They are so cute running around and playing together.
So yeah. I've been feelin' the CP thing this week. And that sucks. I don't like feelin' it. I like it when all I see is what Ben CAN do, instead of what he CAN'T.
We are having a good time though. That's for sure. It's just that I've been feelin' it.
Posted by Cary at 2:00 PM