If you've been following along on Facebook, then you pretty much know the main details of our first day in Montreal. However, I do want to detail this whole thing so I can look back and read this later, so I'm going to try and blog lots. I feel like this surgery is such a big deal for Ben and our family that I want to write down almost every teeny, tiny detail so we won't forget any of it.

We flew to Montreal on Thursday afternoon. I was so grateful that the weather was good in both Moncton and Montreal and we even arrived a few minutes early in Montreal...with luggage and all. I seem to be cursed when it comes to air travel, so I always take a few minutes to appreciate it when everything goes good.

A Shriner named Alex was there to meet us to take us to the hotel. We are so used to seeing Shriners that are 65 and older, that it was a bit of a surprise to meet a Shriner younger than us...with 2 young children. Unfortunately, the instructions that he got for our pick up were not quite correct (2 parents and a child (yep), one night stay (nope), no wheelchair (nope), and no walker (nope)). So he thought his VW car would have sufficient room for us and our stuff. Of course it didn't. So Ben and I hopped in with him while Clarence (and Ben's wheelchair) took a taxi.

The traffic was pretty bad so it was slow going on the highway. And then of course, Ben got the "pee wiggles" and I was petrified that he was going to pee himself before we got to the hotel. Luckily, we were close to an exit and Alex quickly took us to a Mike's Restaurant where we snuck in to use the washroom.

The hotel is a suite hotel. It is the one that Shriner's uses for its patients and we are grateful that our hotel costs are covered and we don't have to worry about that at all. To describe the hotel, I would use the words functional and clean. It is definitely not fancy, but it's totally fine. I am very happy that we have a FULL kitchen. You never know what they mean by that, so I was happy to see a full size fridge, stove, sink and microwave. And it's even pretty well equipped with dishes and pots and pans.

We specifically requested that our room have a separate bedroom. Ben goes to bed by 7pm each night and it's nice if we can put him to bed in our room so we can stay up and not have to worry about waking him. Our room has 2 double beds and the living room has a pull out couch. So he sleeps in my bed (yes, Clarence and I opted to each take a bed instead of squeezing into a double. After years of sleeping in a king bed, we just can't imagine a double bed anymore) until we go to bed and then we move him to the pull out when we go to bed.

Ben is a champion sleeper and was exhausted when we got here so he fell asleep before we even left the room that first night.

That evening, I was very thrilled to get to meet another blogger named Jenny. Jenny lives in Edmonton and has twin boys that are almost 3 years old. They both have CP although are pretty differently affected. Jenny and I chatted for almost 3 hours before finally calling it a night around 11:30. I just love meeting other moms of kids with CP. It's like an instant bond. 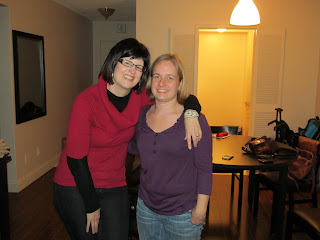 Friday was a big day.

I didn't really think it would be, but it was. Ben was "only" scheduled for an MRI at 9:45 and a pre-op appt at 12:30. I figured that the MRI would take at most a couple of hours (after our previous experience when Ben was 18 months old) and that we'd have time for lunch between appointments. And I thought we'd be done for the day around 1:30.

Well. Ben had to arrive at the hospital by 8:30 so we could get him a hospital card. He had to fast from 3:45 am and could only have water or applet juice up to 6:45. So of course, he was hungry. After getting his hospital card, we went up to MRI. He had to be there an hour in advance.

The first part went fine...until the nurse started talking about putting his IV in. Because you have to lie still for the MRI for a half hour, young children are sedated for it. Probably even some adults are if they have issues with claustrophobia! Why she had to start talking about a needle 30 minutes beforehand made no sense to me. I understand that she wants to explain what's going to happen, but 30 mintues before?!?! Of course, Ben was pretty scared and upset. He also wasn't too thrilled about having to wear a Johnny shirt.

But we did manage to get him changed and we had to hold him down while she put the IV in...and after a few tears and a bit of screaming, it was all over. Compared to other kids in the room, Ben was actually pretty good and not near as upset or terrified.

We then had a little wait before he would go in for the actual MRI so he played a game on Mommy's iPad. How cute is he in his Johnny Shirt? 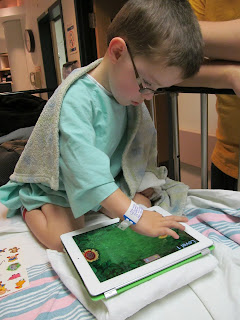 It was up to Ben whether he had Mommy or Daddy go in for the MRI with him...and as per usual, he chose Daddy. So off they went. I'm told he was asleep within seconds. The MRI took about a 1/2 hour and then he was back in the room with me. Where he continued to sleep for another 2 hours. 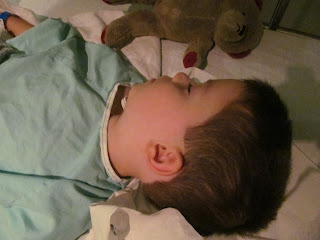 Finally, at 12:15 we shook him awake as we had another appointment to get to. Now, the sedative he was given is called Nembutal...and they warned us that he would be woozy with little balance afterwards. But we were a little unprepared for how woozy he would be. He was really too woozy to even go in his wheelchair as it doesn't recline. So the wheelchair was used as a cart for all of our stuff while Clarence carried Ben for the rest of the day. Needless to say, it's a lot of work to carry around a 40 lb. 4-year-old with no control of his body.

After some apple juice and some social teas, we headed to our next appointment. We met with another nurse who took Ben's blood (yes another needle, but luckily this time, she didn't tell him WAY before he needed to know). And then basically, gave us more details on how the day of surgery would go. She also gave us a little tour of the area of the hospital where Ben will stay for 5 days following his SDR.

We met with Dr. Farmer (the neurosurgeon) for a few minutes. Ben explained to Dr. Farmer that he needed an operation because his brain doesn't listen to his knees. Dr. Farmer was pretty impressed with Ben's analysis! Dr. Farmer showed us Ben's MRI and explained that it was basically what he expected to see. So that was good news.
We did learn that even though the "handbook" we received that said that the surgery is between 4 and 8 hours...that it's really an 8-hour surgery. So Wednesday will be a long day for us. Surgery will be at 7:45 and he won't be finished until around 4pm.

We also met with Dr. Farmer's resident for some quick and easy questions about Ben.

After that, we could have left for the hotel, but we knew we had to get a spine x-ray done so we figured we'd might as well go get it done. We were tired and ready to go back to the hotel, but knowing that we had the weekend to recover and that we would have 2 busy days on Monday and Tuesday of next week, we figured we might as well get it done. It was fairly quick and we were back at the hotel by about 3:30.

When we got back to the hotel, we really started to realize the effect that the sedative was STILL having on Ben. Seriously, it was exactly like dealing with a drunk. His balance was horrible and we had to constantly follow him around as he would fall over backwards when sitting. He was continuously laughing and purposely twirling around because it made him "dizzy" and that was fun! It was exhausting!

After some coffee and toast (is there anything better than toast?), Jenny and her family joined us for a little visit. It was so great to meet her kids. They are just adorable! I did take pictures, but as her blog is private as she doesn't want her kids pictures all over the internet, I won't post them here. Sorry!

That was pretty much our day. Ben went to bed at 7 and after some take-out and a little grocery shopping, we headed to bed at 9. We were totally exhausted.

Now we have 2 days off. So far, we have done nothing. Ben is now playing a game on my iPad while Daddy showers and I blog. We hope to hit the pool and that's about it. Unfortunately, the sidewalks here are a MESS so that makes getting around with a wheelchair almost impossible. Plus, it's absolutely freezing! There is a shopping centre really close though as well as a movie theatre. We may check the listings to see if there is anything appropriate for a 4-year-old.

Monday and Tuesday bring more appointments. Luckily, Monday will involve NO NEEDLES. Tuesday we likely won't be so lucky.
That's it for now! Sorry for the extremely long post, but I don't want to forget any of this experience. I really do hope that it's going to be a life-changer for us.