We are almost to the big day. It doesn't feel real. We have wanted this surgery for so long, I can't believe that it's happening tomorrow. 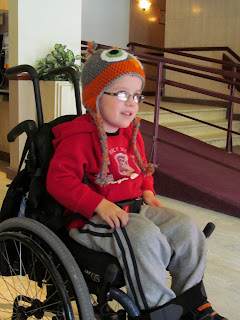 Monday and Tuesday consisted of more appointments. Monday was a fairly easy day. Ben had an evaluation by the physiotherapy department at the Children's Hospital in the morning. It went fine and Ben did everything asked of him. And then we headed up to Shriner's around lunchtime. In the afternoon, he met with a Child Life Specialist who went over the details of the surgery with him. Honestly, I thought this meeting was going to be more beneficial, but it was really a waste of time. The specialist wanted Ben to dress up like a doctor and "operate" on a doll, but he was having none of that. And she didn't seem to know what to do with a child who didn't want to go along with her little play. 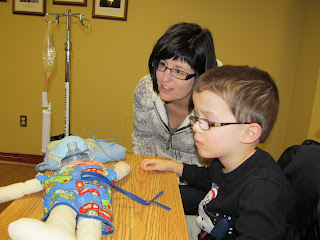 Fortunately, Ben already pretty much understands how the surgery is going to go so this appointment wasn't crucial in my book.

After that, we headed downstairs to meet with the physiotherapy department at Shriner's. These are the people that are going to work with Ben in the 6 weeks of rehabilitation. We got to meet Ben's PT. Her name is Stephanie and she's AWESOME. We LOVE HER! And so does Ben. I thought this appointment would consist of another evaluation, but since Ben already had a comprehensive evaluation done by their department when we were here back in October, we didn't have to do it again. Great! Instead, Ben was measured for the tricyle and the prone board (i.e. stander) that he'll use as part of his rehab when he gets transferred back to Shriner's. We also got to see THE POOL! It is TEENY TINY. But Ben was still excited and told Stephanie all about his swimsuit (or "babing suit" as he calls it). We also found out that he'll need new braces. He will be fitted for those on Friday so that he can have them next week.

Particularly exciting was meeting a little girl name Loralee (sp?) and her mom. Loralee had the same surgery as Ben just 2 weeks ago. Loralee was REALLY quiet, but I had a great chat with her mom and I think we will get along great in the coming weeks. Plus, they are francophone...so I will get to practice my french while I'm here!
After that, we were done for the day! So of course, we headed back to the hotel for MORE SWIMMING! While Daddy and Ben swam, Mommy headed out to get some more groceries.

This morning we had to be up early as Ben's urodynamics study (bladder test) was at 8am. I will say that this was probably the worst part of our adventure so far. I'm not going to go in to all the details, but basically Ben was TERRIFIED of what they were going to do with him. And there was plenty of screaming involved. We did manage to get through the test with lots of help from Ben's new favourite video "How to Train your Dragon" as well as a lovely helper named Angie.

After that, we had a quick chat with the social worker where I proceeded to give her my thoughts on changes to a few processes that would help the parents (and child). And then we were off to see Occupational Therapy. I love OT. Compared to PT, it is just so easy. Ben really has very little problems with his hands so this is always an easy appointment. 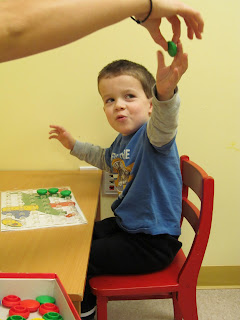 As we were heading to the door, we actually ran into Dr. Farmer (Ben's neurosurgeon) who wanted to see Ben walk (he couldn't the other day as he was all drunk from the sedative from the MRI). Luckily, Ben was in an obliging mood and showed off for a few minutes with his canes. He is so tight in his calves and hamstrings that people don't expect him to be so good with his canes...so everyone was impressed.

Then, we were done. Done with all the crap. Seriously, we are all exhausted and can't wait for surgery day to get here.

We got back to the hotel in time to have some lunch and then a big long nap was in order for all of us. Ben and Daddy are just waking up now. Once, Ben stops snuggling his blankie, I'll see if he wants to go for swim.
My parents arrive in a few hours. They are in flight now and should be here between 5:30 and 6. It'll be nice to have them here for the days of surgery and recovery. I have already put mom in charge of groceries and cooking. I think she may even have some turkey bones in her suitcase so she can make a soup.
Think of us tomorrow as you go about your day. We leave for the hospital at 6:30 in the morning. We need to be there by 6:45 and his surgery will start at 7:45. The surgery will take 8 hours to perform.

The hotel where we are staying is very close to the Children's Hospital...like a block and a half. So I expect that we will go back and forth and not spend the entire 8 hours at the hospital. There will not likely be many updates to give during the day as apparently, we won't even get any updates til towards the end, if at all. For them (not us), the surgery is fairly routine and there will be nothing to tell us about.