I was worried what today was going to bring as I struggled to get comfortable and sleep last night. Ben had me up at least 5 times complaining that his tummy hurt and I was worried that he was going to be sick again today. But, luckily, that seems to have passed. I convinced him to have some toast and banana this morning for breakfast and after that, he never complained about his tummy again.

After we had breakfast and got dressed (well, I got dressed. Ben stayed in his jammies.), we decided to head down to the playroom to see what that was all about. Well. It is simply fantastic. Check the next 3 photos. It's HUGE (considering how few children there are around) and there are a TON of toys. Ben had a great time building a tunnel and garage with blocks for his hotwheels cars.

And you know what the best thing is? There are child life specialists there JUST to entertain our kids! How awesome is that? So basically, I get to sit back and enjoy my coffee while they play with Ben. ﻿ 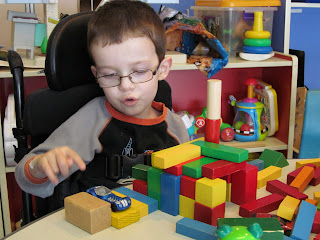 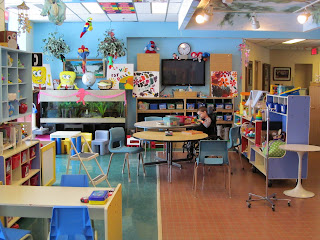 At around 11am, we headed back to our room for a bit of a rest and say good-bye to Daddy. Ben had just spent 90 minutes in his wheelchair and that's A LOT so early in his recovery. You many not have noticed from the pics but this isn't his own wheelchair. His wheelchair isn't supportive enough at this point to be secure for him. So for now, we are using a wheelchair from Shriner's. But it's obvious that he has great core strength. A lot of kids after having this surgery, are slumped right over and have a hard time to even sit up properly.

After some lunch, Betty came to visit us in our room. Betty is Ben's OT. She is fantastic and Ben was happy to get back in his wheelchair to play with her. 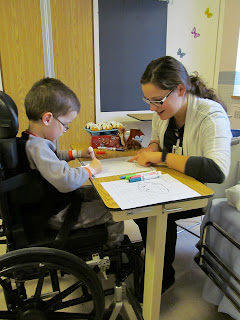 And I don't know how she did, but she actually managed to get him to hold his marker right! 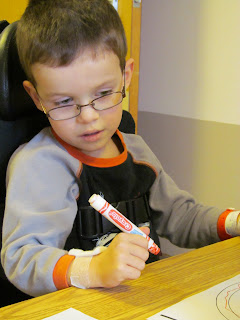 After about 20 minutes with Betty, we headed back down to the playroom. Well. It got even better in the afternoon. A volunteer named Philip was there to play with the kids. At first Ben was quite shy around him, but after about 10 minutes, Ben was roaring with laughter and having a great time with him, as you can see from the pic below. 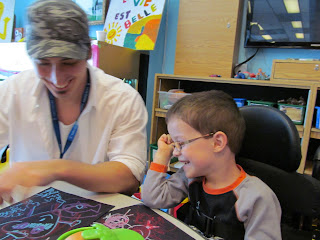 They made a bunch of pictures together with pastels and now they are hanging on the walls in our room.﻿

Then, we headed off for Ben's for PT session with the PT-extraordinaire, Stephanie. At first, he was a bit nervous and didn't want HER to get him out of his wheelchair (it hurts his back a lot when we do transfers). He wanted MOMMY. Well. Once Stephanie moved him, he didn't want anything to do with Mommy after that. He prefers Stephanie because she's "gentle" and Mommy's not.

The first session was pretty relaxed. She started with bubbles. She would catch a bubble on the wand and he was to kick the bubble with his foot to pop it. She wanted him to kick by making his leg straight. So just by moving the leg below the knee. And also, she wanted him to just move one foot at a time. Both of these things are extremely hard for a kid with the kind of CP that Ben has. First of all, kids with CP have a hard time moving just one leg. And secondly﻿, their tendency is to lift the leg from the hip instead of extending the knee.

Well. He did amazing. The left leg did it very well from the beginning. The right leg took a little longer to get going but eventually Ben was able to do it with his right leg as well. And of course, she made it all into a game. He had to burst 20 bubbles (10 with each foot) before she did. And if he did, then he got a prize.

Stephanie was thrilled with how quickly he could do this exercise. She told me that usually it takes the kids a few days to get it down. Woohoo! 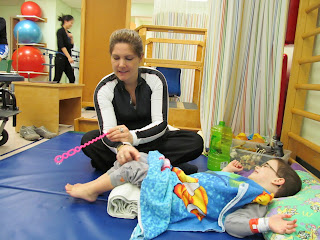 After that, we moved on to stretches. It's important to understand that most of Ben's spasticity (i.e. tightness) in his legs is now gone due to the surgery. However, his muscles are still short. Because his hamstrings and calf muscles haven't been able to be stretched out properly (due to the spasticity) they are shorter than they should be. So although, Ben's legs feel all loosy-goosy now, he still can't get his heel to 90 degrees. His calf muscle is too short. So there will be lots of stretching over the next 6 weeks in an effort to get it to lengthen so he can get his heels down.

Usually, stretching is really painful and uncomfortable for Ben. Even with distractions. Today, he watched a Diego video while Stephanie stretched him. He didn't even complain at all. There wasn't even a grimace. You'd swear she was doing nothing to him. I asked him afterwards if the stretching hurt him and he said that no, she was really gentle. But according to Stephanie, "she was really hauling on him." So that's great!

After that, we headed back to the room for supper. Before supper arrived, we had the chance to do FaceTime with Daddy and Daniel. Oh my goodness, it was hilarious. They were so happy to actually see each other that all they did was make funny faces at each other and then laugh histerically. This went on for probably 15 minutes. Mixed in between faces, was lots of "I miss you" and "I love you". It was adorable.

After supper, we decided to go get in the wheelchair and go for a walk around the hospital (it's not very big...so we walk slow and stop and look at everything). While out, we found a Snakes & Ladders Game in the Family room so we played that (Ben won, of course). We even headed downstairs to where they hold the clinics to say goodnight to the fish in the big fish tank.

And then it was bedtime. Here's a photo of our room. It's pretty sparse at the moment, but we're trying to fill up the walls with pictures and cards. So far, Ben has received two packages in the mail. One from Grandma Robinson that was here when we arrived yesterday and one from Uncle Jeff and Aunt Sheryl and the kids that arrived today.﻿ 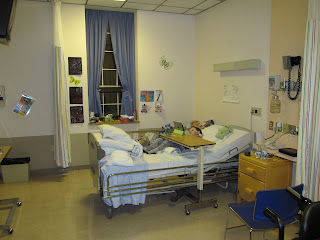 ﻿Basically, it was a great day. Ben enjoyed every moment of it. And now he's sleeping in the bed next to me as I type.

Let's hope it's another great day tomorrow.
Posted by Cary at 10:40 PM