We are officially 1 week post-op. I can't believe it. In some ways, it feels like it's been months since I saw them take away my screaming child and yet in others, it feels like yesterday. I'm so glad that it's not a week ago...and we were hanging out in the recovery room.

Today was an up and down day. Some parts were great and others...not so much.

First off though, here are a few pics from our walk around the hospital last night before bedtime.

Me and Ben...after he kicked my butt at Snakes & Ladders: 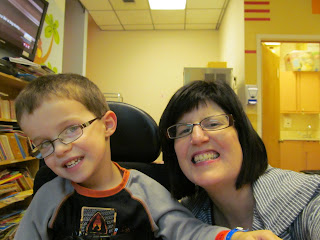 We had to go say good-night to the fish at the clinic downstairs. Here's Ben telling me to be quiet...they're sleeping: 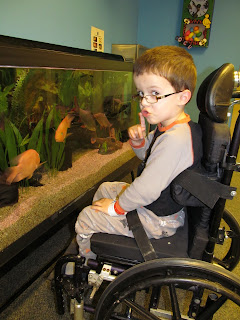 We also had to say goodnight to the albino frogs. Ben couldn't see them as they were too high up so I took a picture for him. Kinda creepy, eh? 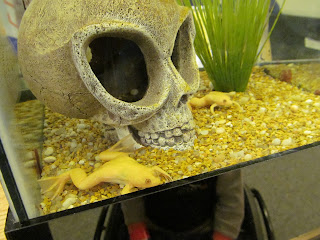 So, now back to today.

We had a better sleep last night. Ben slept well and I slept considerably better than the night before. I decided to try sleeping in the converted chair the opposite way around and it was somewhat better. Plus, I was just so freakin' tired.

We woke around 7 and I thought we had LOTS of time before my meeting at 8:30. Well. We would have. Except that Shauna and Daniel decided to FaceTime us around 7:45. It was great though. The boys loved it again and Ben got to see Shauna for the first time in nearly 2 weeks. They used the iPad so show us the snow outside as well to show us the new train set that Daniel had set up.

So yeah. This put us a bit behind schedule. I left Ben with a student nurse (well-equipped with board games and books) to attend a meeting with all Ben's "people". There is a lot, you know. His PT, OT, nurse, dietician, social worker and child life specialist...plus me. Basically, we talked about Ben's schedule, his allergies, and other logistical things. I did manage to complain (once again) about my bed. Well...the squeaky wheel gets the grease. Or in this case, the squeaky mom gets the cot. About 10 minutes after the meeting, the social worker arrived with a cot for me. It's still temporary as I should have a real bed, but this is a million times better than that convertible chair I was on for the last 2 nights.

After the meeting, I had a battle of wills with Ben about wearing clothes today and not pajamas. This boy would were jammies every single day of his life if I let him. Well. It was time for clothes. I won this time. I actually mentioned Ben's preference for PJ's at the meeting and I think at some point, his team will have a pajama day just for him.

After the meeting, it was time for OT with Betty. After getting him dressed, I loaded him into the wheelchair and off we went. He played with blocks, coloured and cut with scissors. I can see that he has stuff he needs to work on, but we have OT 3 or 4 times a week for the next 6 weeks, so he should be fine.
He was tired after OT though. An hour in his wheelchair wears him out. Especially since Betty undid the strap around his chest so he really had to use his core to stay upright. So back to the room we went.
He was so wore out that Stephanie did his PT session in his bed. Basically, just stretches and checking out his old braces to see if they would work until his new ones are ready. I couldn't believe how easy his braces went on. What a completely different experience than before. Before, I had to position him just right and stretch and strecth to just get them on. And then 5 minutes later, he'd just pop out of them. Now? It's like putting braces on Daniel. No resistance AT ALL! Amazing!

After lunch, the orthotist came by to cast him for his new braces. We were hopeful that he would be able to get dinosaurs on his braces this time, but nope, no luck. No dinosaur designs existed. I then was hoping that he would get the really cool camouflage ones, but he wasn't interested. If he'd had his choice, it would have been the Halloween ones...but I managed to steer him towards more of a tie-dye look that he calls "rainbows". So a compromise of sorts.

Then came the not-so-fun part of the day. His dressing needed changing. After much kicking and screaming, the nurse and I managed to get it taken care of. I was also hoping to give him a bit of a sponge bath at the same time, but he was not in the mood for anymore touching or prodding.

Then it was time for the playroom. Angie, another child life specialist, decided to put Ben and Nora-Lee (I had her name wrong in an earlier post, it's Nora-Lee, not Lora-Lee) to work...washing the toys. Which of course they loved! Ben gave all the animals a bath, while Nora-Lee worked hard washing dishes. 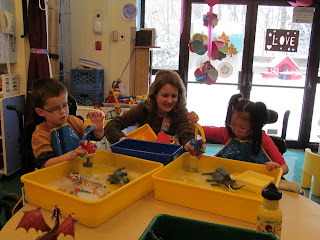 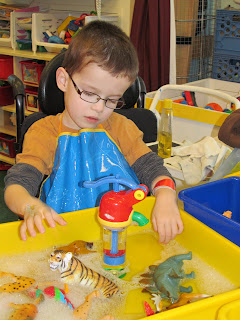 After playtime, it was time for another session of PT. This time, we actually went to the PT gym for some real activity...like crawling for the first time since surgery! Yes, he needed a bit of support from Stephanie but he basically did it himself! Totally cool! And, of course, Stephanie had a little game all made up for him with dinosaurs to keep him motivated. 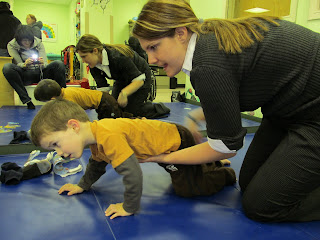 It was hard for him though. Just to give you an idea of what the surgery has done to his body...before, he could crawl all over the house. He could crawl up 2 flights of stairs to go from our basement all the way to the 2nd floor to his bedroom with no help. Now? Well, he needs some support from Stephanie and he can only go about 4 or 5 feet before he has to rest. But. Stephanie was THRILLED that he could do this the first time trying after surgery. THRILLED.

Then, we did more bubble-popping with his toes like yesterday...where he was a real champ again. Tomorrow, she may have to weight his feet to make it harder for him.

And then...we were onto sitting. Ben sat on the bench with Stephanie behind him for support. And then they played a beanbag game. He was nervous at first, and needed support from Stephanie but by the end, he was doing it independently. And what an arm that kid has! 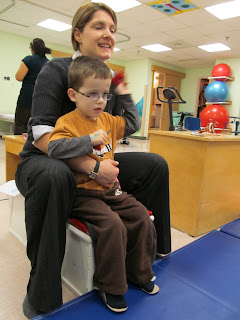 By the time the session was over, he was EXHAUSTED. So back to the room we went for down time and supper. After a few videos and stories, Ben was asleep by 7:15.

So yeah. An up and down day. Not quite the high that yesterday was, but nevertheless, a success.