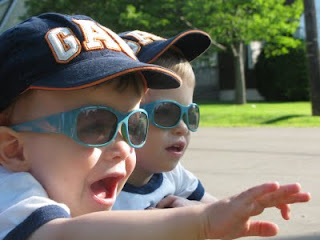 This week's them over at I Heart Faces is Excited. I didn't think I had anything good to submit but then came across this photo. This is from one of our morning walks this summer when we came across a DIGGER! They boys were so excited. In this photo, Ben is likely yelling "DIGGER!" while Daniel looks on. Go on over to I Heart Faces to check out some other great entries.

Is anybody out there?

I came across this post today about a child who needs a home. It's a very sad story but there has to be someone out there that is right for this child.

And if you are at all moved by this story, please post it on your blog so that more people see this post. 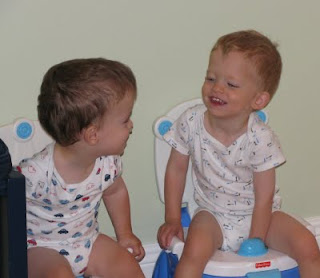 The best thing about kids is that you don't have to figure out when they're ready to do something new...they just tell you (in their own way of course). This was something that Ben's private PT told me ages ago. Think of it this way...you don't one day decide that it's time to teach your kid how to dress himself...over the months and years, he just starts to do little bits at a time...like pushing his arms through the sleeves or pulling the shirt over his head...or taking his own socks off. And then eventually he figures out how to pull his pants up or do up a button. Of course this doesn't always hold true for kids like Ben, but it still does most of the time.
Well...my boys are super-interested in all things "potty" at the moment. They've always been super interested in anything that goes on in the bathroom and had figured out what their potty was for. They would often put their stuffed animals on the potty and say "pee" or "poop". Or maybe just "stink".
Well, one day last week, my nanny decided to put Ben on the potty without a diaper...and guess what!?! He actually peed. He was so proud of himself. It was adorable. Since then, Ben has peed on the potty once and Daniel twice. Now I realize that they are nowhere near ready to be fully potty-trained and yes, this obsession may disappear at any time, but it's cool to see them growing up.
Posted by Cary at 9:41 PM 6 comments: