A few of my favourite things (part I)

I've been meaning to do this for awhile. Last week, the question of the week over at Multiples and More was "what are your favourite blogs?" I spent a bit of time reading responses and managed to find a few great ones that I hadn't managed to stumble across before. I LOVE finding a new blog to read. So, without further ado, here are a few of my favourites (in case you haven't stumbled across these ones yet):

1. Bird on the Street - Charlie has got to be the cutest little boy ever and I just love his mommy's attitude and perspective on life and raising a child with CP.

2. The Spohrs are Multiplying - This blog is written by Heather Spohr, mommy to Madeline and now Annabel. Madeline was an amazing little girl. She was a preemie and passed away last Spring. That is when I found this blog. The emotions were so raw and I was just drawn in. I couldn't stop reading. I'm glad I kept reading. Just yesterday, Annabel Violet was born (full-term)!

3. To the Max - Ellen's son Max loves the colour purple. And her daughter Sabrina...well, she's just a cutie pie. Ellen has some some great insights and perspective on raising a son with CP since she's been doing it for a few years now.

5. Bitch Cakes - Sheryl is an inspiration. I love her perspective on weight loss, getting fit and eating healthier.
Posted by Cary at 10:01 AM 2 comments:

Ben's been using his walker for about 2 months now. So far, he's only used it at someone's house (ours, my mom's, my brother's). He's gotten pretty good with it even though it's mostly used as a toy and not at all for transportation.

I've been itching to take it to the mall and see how he'd do with it. But he only really learned how to use it proficiently towards the end of November and the malls were crazy with Christmas shoppers.

We finally went this afternoon. He did AWESOME! He was so excited to go to the mall with his walker. He walked almost the ENTIRE mall. I kept asking if he wanted to go in the stroller and he would yell "NO". Even though he was tripping over his own feet, it was still a fight to actually get him away from the walker and into the stroller.

P.S. In case you were wondering, my typically-developing child preferred to stay in the stroller. He didn't walk at all! 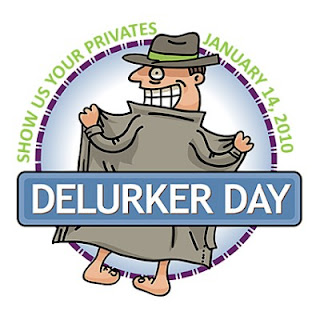 Apparently, it's National Delurker Day. Who knew there was such a thing? Not me.
I probably don't deserve it, since I hardly post anymore, but if you're reading, why not leave a comment so I know you're there? You can just say hi, or tell me a bit about yourself and why you're reading or even ask me a question if you want. I'd love questions. Then I'd have an easy post topic.
So go ahead...I dare ya...delurk!
Posted by Cary at 1:34 PM 5 comments:

I came across this post over at A Life Less Ordinary today. It's a wonderfully uplifting post about a little girl with CP who gets invited to play outside in the snow. It made me cry but gave me such hope for the future. Perfect for today, the start of a new year.