The boys are obsessed with playing Hide-n-Seek at the moment. It's their favourite thing to do (besides build forts and obstacle courses with my couch cushions). They're pretty cute when they're playing...mainly because they're so bad at it. I think Ben believes that if he can't see me than I can't see him. I routinely find him cuddled up in the middle of the hall way floor with his eyes facing downward. And you know where Daniel's favourite place to hide is? The last place he found you. And he's pretty loud about it as he'll say "i want to hide here Mommy....you go count." And if you don't find them within about 5 seconds? They can't stop giggling. The best part for them is being found....it's totally cute.


They are actively learning their letters and now know all of them (if in uppercase). So now they keep trying to figure out what things say. We went to get their haircut the other day (they were such big boys and sat on the "board" for the first time instead of Mommy's lap...I was so proud). Daniel looks at the sign in the window and spells it out. "C", "L", "O", "S", "E", "D". The he looks at me and says, "that spells Haircuts". Wrong...but pretty good guess! Then when we're leaving, he goes "O", "P", "E", "N". "That spells Welcome to Anne's". Pretty smart kid, eh?

Ben pooped on the toilet for the first time today! And yes, I'll admin it, we've taken to bribing. I now owe him a present. It's funny how he thinks he can trick me. I went into the living room today and it was pretty obvious that he was working on a #2 in his diaper. He looks at me and says "Mommy, go away. Go in the kitchen"...basically his way of saying "Please don't put me on the toilet, Mommy". But I convinced him to try it out in exchange for a present. And he did it! He was really proud of himself. He even got to wear some Thomas underwear until naptime.

And just something totally random to end this blog post...I am addicted to CSI reruns.
Posted by Cary at 9:39 PM 1 comment: 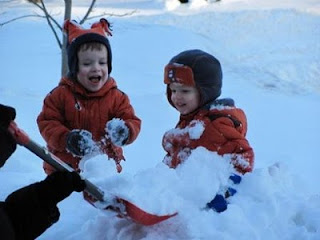 1. A few weeks backs, I posted about our struggle with spasticity management. At that time, I really thought we were heading towards surgery sooner than later. Well, a few days after that post, we had a conference call with Ben's physiatrist and one of his many PT's. It was a good call. After much discussion, the real conclusion that we came to, is that I want to gather as many opinions about Ben as I can so that we can make the best decisions for him. I really want to go to Gillette's Children's and have a gait study done and hear about what they think would be best for Ben. But I think that's about a year away. Ben is not always super cooperative, and I think in order to really do this, he needs to be a bit older. So for now, we stick with the botox and serial casting. Which leads to update #2...

2. I also told you guys that Ben was going for botox under general anesthetic a few weeks back. I was nervous about him being under general...but it all went really well. My kid continues to surprise me when it comes to doctors, hospitals, etc. He was an angel. He went off to the operating room on his own with me (which was very hard on me by the way) and did wonderfully. Didn't fight the mask at all apparently. When we saw him about a half hour later, he was awake and enjoying a lime popsicle. After about 45 minutes, we got him dressed and took him home. He is already standing and walking better. I can't believe it actually. And we're only 8 days in.

3. So we'll do another couple weeks of casts starting on Wednesday of this week to make sure to stretch those calf muscles as much as we can while the botox is effective. Luckily, he loves having "red boots" and its really not an issue for us at all at this point.

4. We're going to be doing another week of Conductive Education the week of the 14th of March. Again, with cute little Sarah. I'm really excited about it. Ben is doing so well with standing at home that I really hope we can make some real progress when we're there...and I hope to see him walking independently with canes this time too.

5. We're anxiously awaiting the start of Spring here. We've been hit with so much snow this winter that we can barely see out our front windows. We just got another foot of the white stuff last night. Now when I'm in my driveway, I can't see over the snowbanks into the neighbour's yard. If we're lucky, we might see the grass by July!

6. In preparation for Spring / Summer, we've signed Ben back up for Therapeutic Riding again. We actually participated in a fundraising event for the riding club this afternoon...bagging groceries at the local grocery store. People were so kind and generous once they figured out what we were raising money for. And I've signed Daniel up to play soccer. It's time for Daniel to have something that's just his. Ben gets to do so much and Daniel usually either stays home or goes to watch. So he gets his own special thing this summer.

7. And we're counting down to our Florida vacation. We're going back to the same resort as last year in Fort Myers. We loved it and it was perfect for the boys so we're heading back there. It's still over 2 months away though. My husband is a tax accountant and the filing deadline here in Canada isn't until the 30th of April so we have to wait til May.
Posted by Cary at 5:58 PM 1 comment:

Ben's getting botox injections on Friday. In his hamstrings and gastrox (calf) muscles. Under general anesthetic. In an operating room.

But he so needs it. We just spent the last 3 weeks in casts trying to stretch out his calf muscles and have barely gotten anywhere. We've basically managed to be able to get him back into his AFO's more comfortably...but that's about it.

So yeah, he needs the botox in his calves. And his hamstrings need it too. So that means ALOT of needles...and his physiatrist is just not willing to poke him that much if he's awake. So that means general anesthetic. Yuck.

So keep us in your thoughts on Friday...although by the time you are all up and about, it'll likely all be over with since we need to be at the hospital at 7am Atlantic time (that's one hour ahead of EST). He should get the botox at around 8:30 and be all done by no later than 9:30.

I'm just hoping that we see some real progress after this. He'll do 2 more weeks of casting afterwards to really stretch those calf muscles once the botox is doing it's work. And then we're off for another week of Conductive Education.

He's been making some real progress with independent standing so I'm really hoping that once he can more easily get his feet flat that we'll see more and more improvement in this area....and then, well, we start working on an independent step or 2...won't that be exciting?!?!

So that's what I hold on to...the gains that I hope we'll be able to make afterwards. And I try to stop thinking about that operating room. I try.
Posted by Cary at 7:56 PM 8 comments:

We're 2.5 years past diagnosis day and I feel like I can really say that I'm "mostly" past the grief. I honestly don't remember the last time I cried about Ben, or CP, or seeing "normal" twins. 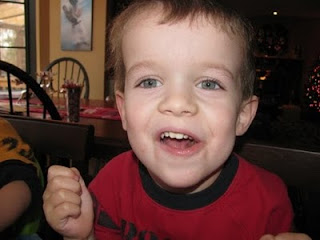 I had an interesting conversation with one of Ben's PT's last week..the one that does his casting. She continually tells me how amazing I am and how different I am from other moms that she usually deals with. I don't think she's ever heard a mom ASK to talk to the wheelchair people because she WANTS a wheelchair for her son.

So I thought about that for a while. Partly, I think this is because I read SO MUCH. I think I read something about CP every single day. But I'm not out there reading medical jargon or googling. I'm reading your blogs. Learning from your experiences. And one reason I think I was maybe a bit ahead of the curve on the wheelchair thing was because of this post by Katy at Bird on the Street and the comments made by adult wheelchair users.

But mostly though, I think this is because I've somehow managed to move past the grief and into acceptance. I've somehow stopped thinking about the CP and the brain damage as "something that happened to Ben". For me, thinking about it that way meant that he "should" have been different. He "shouldn't" have CP. He "should" be able to walk. And thinking like that was like a poison in my mind.

Somehow, I've managed to just think that this is how BEN IS. This did not "happen to him". THIS IS BEN.

And when I think that way, I stop crying. And I start to see Ben for who he is right now. And I'm so happy that I get to be his Mom. Me. Not someone else. Me.

And aren't I lucky? 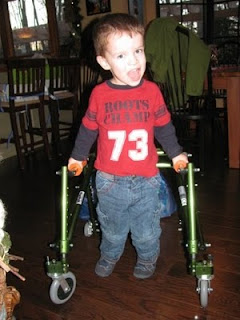 Sometimes moments of pure joy show up when you least expect it. Before today, if someone had told me that I would be filled with joy and laughter at the sight of my son in a wheelchair, I'm not sure I would have believed them.

But that's exactly what happened when Ben tried out a wheelchair for the first time. Absolute joy. In him. In me. In the OT. And in anyone else who had to come out of their office to see what all that laughter was about.

And when Ben looked at me and said "Can we buy one Mommy?"...what else could I say, but "Absolutely."

So thus begins our adventure to buy Ben's first wheelchair. I just wish I'd had my camera.
Posted by Cary at 9:33 PM 7 comments: