A fun day of allergy testing 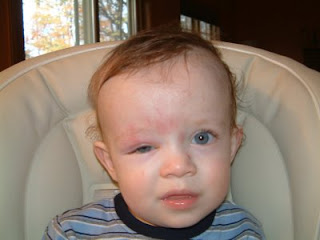 Ben has an egg allergy...a very scary egg allergy...as in "rush him to the hospital because it looks like his head might explode" kind of allergy.
We found out about this allergy last fall. Hubby and I were away and my mom decided it would be a good idea for them to try egg (don't even get me started on this one). Well...it turns out it wasn't such a hot idea. Ben severely reacted and was rushed to the hospital. The above picture of him is actually several hours afterwards when he was looking much better!
The boys' pediatrician is also an allergy guy (which I guess is a good thing). After the egg fiasco, he ran a bunch of allergy scratch tests on both of them for various things (eggs, dairy, soy, dust mites, house dust, feathers, cats and dogs). This was in January. It was a horrible experience for all of us. It consisted of a number of "scratches" on their backs while hubby and I held them down. Lots of fun for everyone involved.
The results: Ben is allergic to eggs, house dust, dust mites, feathers and cats and dogs. Daniel had slight reactions to a couple of things but the pedi couldn't conclude that he was really allergic to anything.
Move ahead to their last pedi appointment a few weeks back. It turns out each of the boys latest bloodwork showed that they were allergic to dairy. I was shocked as they love all dairy and from what I could tell had never had a reaction to it. The pedi wanted us to cut out all dairy until he could get us in for more scratch tests. (Note - the previous scratch test showed neither had a dairy allergy). After leaving his office, I decided that I wasn't going to cut out dairy until a positive scratch test would prove the allergy. I really didn't (and don't) believe that they are allergic to dairy. They love milk, yogurt, cheese and butter. And I wasn't ready to cut these things out without any real proof. Plus, Daniel is tiny and I wasn't ready to cut out all those calories from his diet.
So fast forward to today. Another fun afternoon of scratch tests. This time I had to provide the whole milk for the test...which is apparently better to use than whatever he used last time. Ben started screaming before he even touched him (which is totally not like Ben who usually charms everyone). After an hour and forty-five minutes of torture, the pedi has now concluded that it's not likely that they have an allergy to dairy.
Thank freaking God is all I can say.