(So I've been trying to do this post for a week now. I have a couple small videos of Ben's last PT session and I wanted to share them with you...but I cannot get the videos to load. So I will do this post with photos instead...it won't be as good but hopefully you'll get the main idea.)

Ben has PT twice a week - once at our local hospital and once by a private PT at home. I took some photos (and video) of his last PT session at the hospital for my own records, but also to share with all of you.

We are pretty consistent about making sure that Ben is stretched every morning so when we arrive for our PT session, we just jump right in. This week we started out "playing stickers". We've done this quite a few times, mainly because Ben loves it so much. And with a two-and-a-half-year-old, you just go with the flow!

This entails many, many plastic-sticker-like things that will stick on a mirror but will also peel right back off. He sits on a low bench so that his feet are firmly planted on the floor. The PT has his reach all over for the next sticker (over his head, on the floor, behind his back) and then he puts the sticker on the mirror...usually high up so he learns to stand and sit independently. He does awesome at it! And loves to tell us what each sticker is (there are dinosaurs, snowmen, butterflies, and lots of animals). 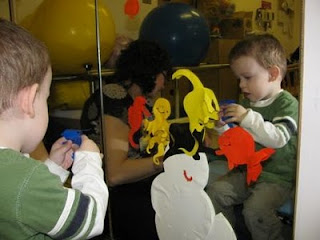 After this, he decided he wanted to walk. We used to practice using his walker, but we don't do that now since he's so good at it and gets to much practice at home. Instead, we decided that we would try "cruising along the wall"...which we've only ever tried once with no success. Well...this time...SUCCESS! Yes, he needed to be helped along and "spotted" but he did great. He walked all the way along the wall to the basketball net (which we moved to next). 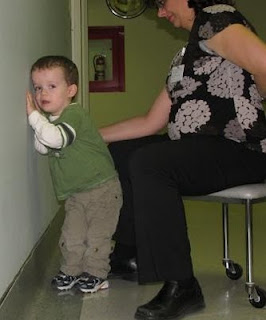 Ben LOVES basketball...I don't think there is another kid out there that likes basketball as much as Ben does. Basketball almost always plays a part in his PT sessions at the hospital since they have a basketball hoop. In this part of the session, he's actually standing on his own in the corner (he's very good at this and we do it at home some). He then has to shoot the basketball. This takes a lot of balance and he does great. And he loves it as you can see. 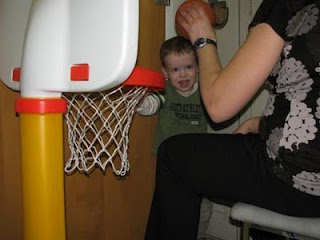 That was about it for that session. He's usually a little worn out, but he's still full of motivation and energy so he actually walks all the way back to the car in his walker when we're done now. (I don't let him walk TO the session since I don't want him too tired for the session.)
And just because I think my boys are so cute, here are a couple more recent photos.

Here are Daniel and Ben in Daniel's chair. Ben was sitting in it first, but Daniel always insists on climbing in behind him. 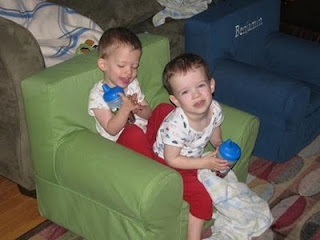 And here they are enjoying their milk first thing in the morning. (Daniel left, Ben right). 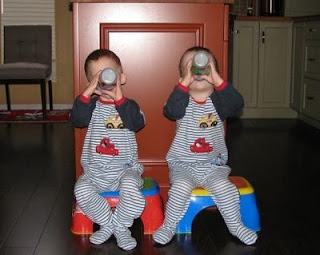