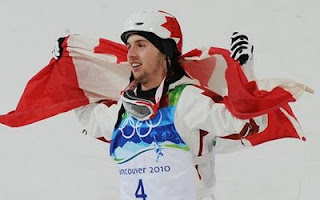 First off, I admit it. I'm an Olympics junkie. It's bad in a "normal" year...when the games are half a world away. It's a million times worse this year with them being in MY OWN COUNTRY!

As part of the Canadian Olympic Coverage, Rick Hansen is doing a series called "Difference Makers" where he shares with fans across the country the compelling and heroic stories of those who have made a difference in the lives of Canadian Olympic and Paralympic athletes. If you don't know who Rick Hansen is...then you have to check out this link. He's made such a difference in Canada that I would say that every single Canadian knows who he is.

One of his stories features Frederic Bilodeau. Frederic is the older brother of Alexandre Bilodeau who just won a gold medal in Men's Moguls in Vancouver. Frederic has Cerebral Palsy. Please take a moment to watch this video. (This link will take you to the main video page. In the search box, enter "Bilodeau Difference Makers" and you'll go right to the video.) It's pretty amazing to see the effect that Frederic has had on this Olympic Medallist.

And isn't it inspiring to think of the effect our little ones might have on those around them? Or even what they might accomplish for themselves? (Personally, I have this teeny, tiny dream of Ben becoming a star wheelchair basketball player and going to the 2026 Paralympics. You need to see this kid shoot a basketball!)