My take on Conductive Education 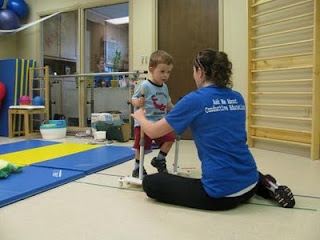 Part of the reason that I've been mostly MIA for the last month or so is that we are super, crazy busy. As part of the craziness that is our Summer 2010, we are currently in Halifax, Nova Scotia for the week so Ben can have a week of Conductive Education (CE). CE is not offered where we live, so we drove 2.5 hours away to get it. This also means that we had to rent an apartment and stay for 5 nights.

I don't have the energy for a full-blown post on CE, but suffice to say that after 4 days of sessions (between 1.5 and 2.5 hours in length), I definitely feel that Ben has made progress. I don't feel that what he's been doing in his sessions is all that much different from a physio session, but I do think the intense (i.e. longer and frequent) sessions as well as a change of scenery (i.e. new place, new person, new tasks / toys) has made some difference.

Because the Halifax CE group is pretty new and Halifax is a fairly small centre, Ben did not participate in a camp or class. Instead he had one-on-one sessions with the Conductive Educator. I think he would really benefit from a class / camp. He is really motivated by other kids and I think that would be a huge plus for him. The next closest CE Centre is in Toronto and I am considering taking him there next summer to participate in a camp. It's not that big of a deal for us, since my husband's family is in that area and we would just tack another week on to our summer visit there.

Some improvements that I "think" I see:

1. Very much improved at pulling to stand. Ben has always pulled to stand by using his arms and upper body, instead of putting one foot flat and then rising onto that foot. He now puts his foot flat almost spontaneously and only needs a little assistance / prodding to get into standing. We will certainly be working on this more at home since he is doing so well with it.

2. Learned to use his hands more to get down to the floor (or even fall). Ben does not have the reflexes that typically-developing children have. Part of this week's work focused on having him "reach his hands to the floor" when getting down.

3. Climbing up ladders! We worked on climbing up and down ladders quite a bit. I'm not sure of the all of the benefits of this, but he did great at it! (I've loaded a video of him climbing below.)

4. Not so much on his toes when walking. I don't know why this is, but all of the sudden, he's walking WAY better in his walker. He's still on his toes, but his heels come down farther and more often.

5. Improved sitting. Sitting on his bum is still a challenge for Ben. He can do it, but it takes alot of effort and he still can't get into the position on his own. The w-sits very well and that's his preferred way to sit. This week we spent a lot of time working on "long sitting" - sitting with his legs straight out in front of him. To keep him occupied while sitting this way, he would blow bubbles. He could sit like this for at least 10 minutes.

6. Walking with canes. Ben tried walking with canes for the very first time today. He was very reluctant to try it but we managed to convince him eventually. He did really great. (See video below).

I think my personal feelings on CE are that it's not all that much different from Physio. I would really like to get him into a CE camp with kids his own age. I think the real reason that it works is due to the intensity of the sessions.

For more info on CE in Canada, check out the March of Dimes.