After my last post, I've had numerous questions about the treadmill that Ben is using. 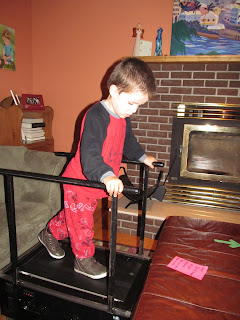 Because of this great blogging community that we are in, I was able to purchase the treadmill used from Amy of A Life Less Ordinary.  Her daughter had used it as part of her rehab after she had SDR and Amy was kind enough to offer it to us as Ben was having SDR last January.

I quickly took her up on her offer.  Logistics, however, proved a bit difficult as they live in Virginia and we live in Canada.  After agreeing on a price, Amy boxed it all up and and headed over to FedEx for a quote...well...they quoted $1,600 to ship it!

So shipping was obviously out!  Luckily, I remembered that my parents would be driving their RV back from Florida to Canada in May and would hopefully/maybe be driving near where Amy lives and be able to pick it up for us.  As it turned out, they were going right through Amy's city/town and it was super easy for them to pick it up and bring it home to Canada for us.

For some reason, it took us months just to get it out of the box.  I'm not sure why...but we just couldn't seem to get around to it.  Then finally, a few weeks back, I came down after sleeping in a bit on a Saturday morning to find it set up in my family room.  And guess what?  Ben LOVES it!

I think he's been on the treadmill every day since.  Sometimes just for a few minutes as part of something else or sometimes for up to a half hour while he watches a video on TV.

Now, to answer everyone's question.  The treadmill came from a company called Carlin's Creations.  You can go check them out if you want.

James' mom over at Jump in for James has already contacted the company for information so once she finds out some info, I'll try to post it here...or at least link up to her blog.
Posted by Cary at 8:51 AM