Ben's first walker that we actually purchased ourselves was the Gator (pictured below).  It is a fairly large and heavy walker.  We initially chose it because it works better outside than other walkers we had tried.  (In the end, we ended up also purchasing a Nimbo as his "indoor" walker...mainly due to the messiness of Canadian winters.)
Well.  Ben LOVED his Gator.  LOVED it.  But...he has now outgrown it.﻿ 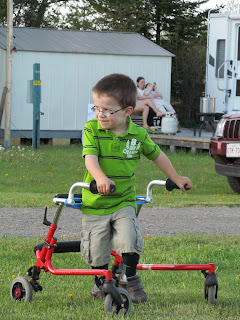 There is not a bigger Gator.  The next one up is actually the Crocodile.  And it only comes in Yellow.  Not Red.  And Red is Ben's colour.  He wants EVERYTHING to be red.
Regardless, he needed a bigger "outdoor" walker.  So we went ahead and bought the yellow crocodile (used) from his CE Classmate "Sarah".  And he absolutely refused to use it.  REFUSED.  Wouldn't even try it out.  Unless I painted it red.﻿ 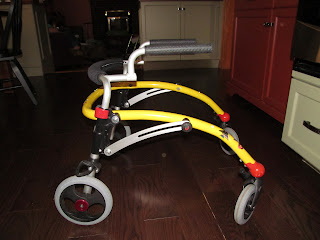 So.  Off I went to the hardware store to find some red spray paint.  Painting it is actually the easy part...it's NOT painting the other parts of it that was the hard part.  Plus I had to remove all the stickers that Sarah had put on it.  It probably took me 2 hours to remove the stickers and then tape up the sections that weren't to be painted.  And about 3 minutes to paint it.

I did 2 coats and then let it dry over night....and then spent probably another hour taking all the tape off.  But doesn't it look awesome? 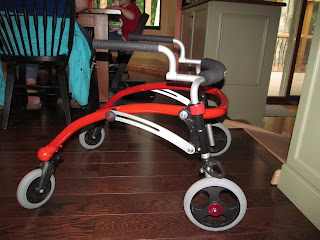 And the most important part?  Ben LOVES it.  And very happily goes everywhere with it.  It's now "him".﻿ 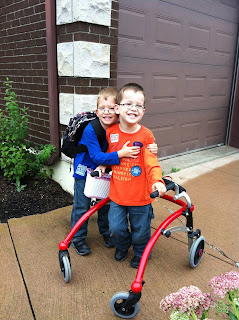