Today was a MILLION times bette﻿r than yesterday. And of course, the main reason for that is that I got a great night's sleep last night.


Today was a slower day as Ben didn't have OT this morning. We started out the day with a bike ride. And then headed off to the playroom in his stander. I still can't believe how well he tolerates the stander. Lots of kids hate it, but he's totally OK with it. It's much easier to get the stander time in than it is to get enough time on the bike.

Ben had his PT session a bit early this morning, at 10am instead of 11am. He was ready to have Stephanie back. To start the session, it was another verson of Ben's favourite game, the beanbag toss. This time, he had to crawl to get his beanbag and then knee walk back to the spot where he could throw the beanbag. And to throw the beanbag he had to be in high kneel (i.e. standing on his knees). Each time, we would up the time he had to spend more time in high kneel before throwing the beanbag.

Here he is knee walking: 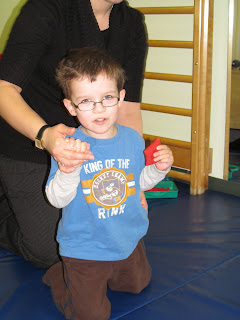 Now, he's in the right spot to spend some time in high kneel. We started out at 4 seconds (since he's 4) and then moved up to about 10 seconds. We don't even have to motivate him to increase the time...he insists on upping the time by 1 second each time. It's so great that he is OBSESSED with counting right now! 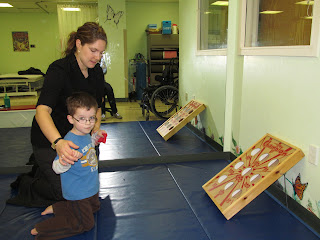 Check him out here in high kneel! He probably held this one for close to 20 seconds! Definitely getting stronger every day! 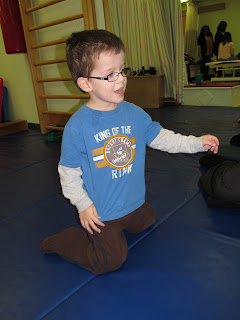 ﻿A rare photo of me! 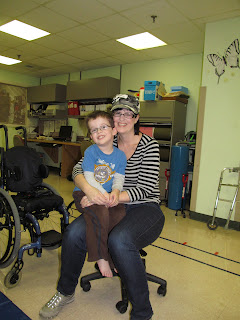 After some very hard work of crawling, knee walking and high kneeling, it was time for more walking with one cane (see video below). He is doing better and better at this. 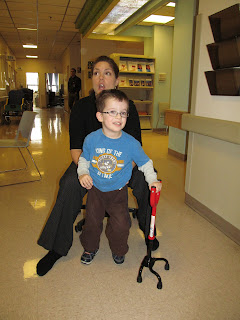 And here's the video of him walking with one cane today:

And at the end of the walking? He got to play a balance game on the Wii Fit! I don't have any photos of that as I had to help out by holding his hand but I promise a photo / video of it soon. It was awesome! He had to stand and then shift his weight back and forth to make the penguin move on the iceberg to catch fish but not fall off. Of course, he LOVED it!

While in the playroom this afternoon, Dr. Farmer came by for a visit. And Ben did some walking with 2 canes all by himself for him. It's funny. You would think that showing off for the Dr. would motivate Ben, but it doesn't. You really need to make it a game for him. But he did fine and Dr. Farmer was very happy. Stephanie told me later that she told Dr. Farmer that she expects that he will do some sort of independent stepping. She meant later...like after we are home. Dr. Farmer said "before he goes home?" So...the challenge is on to get some independent steps BEFORE he goes home! Wouldn't that be amazing???

After playroom time, it was time for the pool again (Ben's favourite part of the day). I can't believe I did it, but I managed to convince him to walk to the pool in his walker. Up to now, we haven't done any walking outside of PT, he usually needs to conserve his energy (or he's just to tired). But now, it's time for him to do more walking outside of PT. Well. He did AMAZING. I don't know why I'm surprised...

I took the walker part way down the hall so he wouldn't walk the whole distance. I suggested to him that we count how many steps it would take to get to the elevator. Well. Counting totally motivated him and off he went. And coincidentally, it was EXACTLY 100 steps to the elevator.

I thought that would be it...but nope, after holding him in the elevator to give him a rest, he was ready to go once we got the 1st floor. And of course wanted to count how many steps it would be to the pool. He walked the whole 90 steps there...so 190 steps in total! Stephanie was thrilled!

It was a really, really good day.

He is tired tonight...and it's a bit rough as our roommate had a rough evening...crying and screaming lots. It really bothers Ben. But it's quiet now. Thank goodness. And they go home tomorrow...plus I heard that next week is supposed to be a bit slower. So hopefully, that means no roommate next week.

So yeah. A really good day. An awesome day. Here's to many more!
Posted by Cary at 8:58 PM