After 15 very long days, we were finally back together as a family for at least some of the weekend. Clarence and Daniel arrived at the hospital around 6﻿:30 on Friday evening. Ben and Daniel were so happy to see each other! After a bit of playing and showing them around, Daniel and I were off to the hotel.  Honestly, after being in hospitals for the last 2 weeks and a not-so-luxurious hotel...this was like heaven. We actually had a suite and it was awesome.

As I was trying to get up-to-date on what he's been up to since I left, I asked him "Daniel, what was the most fun thing you did while I've been away?". His answer "Come to visit you and Ben! Cause I missed you so much!" Adorable. And the perfect answer.

Daniel was very over-excited and only managed to get to bed around 9pm...which is 10pm for him. Much later than his normal 7pm bedtime. Of course, this didn't affect his wake-up time too much and he was up and ready to face the day at around 7am. I quickly got him set up with a new Thomas video so that I could sneak back into bed (and what a bed!) for another hour of shut-eye.
After some breakfast, we headed back over to Shriner's. Daniel was just itching to get his hands on some of those toys in the playroom.

Here are Daniel and Ben playing with this cool "balls-through-the-maze" toy that they both loved: 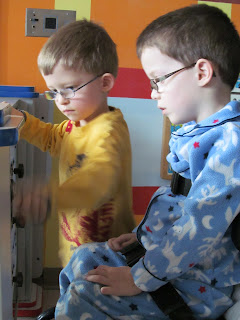 ﻿After a few hours of playing and lunch, Daniel and I headed back to the hotel for some time in the pool. It's quite a nice pool area...with a large common pool, a warm kiddie pool and a hot tub. 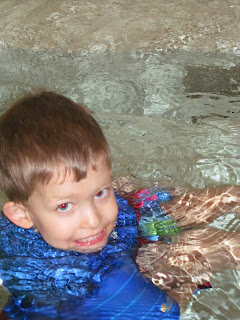 On Sunday, after some more time in the pool, Daniel and I ventured out. We decided to go check out the Biodome...which entailed a ride on Montreal's Metro. Daniel LOVED it!

And the Biodome was AWESOME! I can't wait to go back with the whole family. 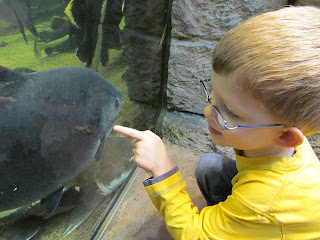 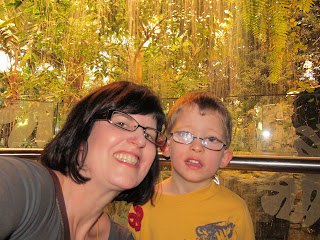 After a few hours there, we headed back to the hotel to check-out and go back to Shriner's for some more family time. The boys loved this soccer game! 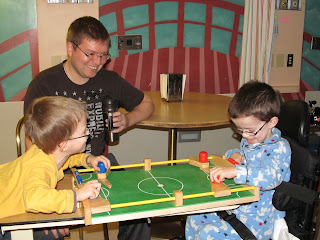 After some playtime and supper, it was finally time to say good-bye. 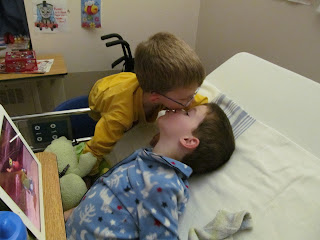 ﻿Now...Clarence and Daniel are at the airport waiting to board their plane home. Ben is trying to go to sleep (he had a big nap this afternoon so he's having a bit of trouble falling asleep) and I'm blogging. I'd like to be watching the Superbowl (Go Pats!), but I need to wait til Ben's asleep before turning the game back on.