After somewhat of a rough night (I think there will not be any more naps...even on weekends), Monday arrived. And we were ready!


I decided not to fight the you-need-to-wear-clothes-today fight and left Ben in his pajamas. Somedays, I'm just not in the mood for that fight.

I did have to fight the you-need-to-go-to-OT fight though. You'd think Ben would enjoy OT...it doesn't require the brute force that PT requires, but nope. Currently, there is a student working with Ben while the OT supervises. Well. The OT is great. The student...not my cup of tea. And apparently, not Ben's either. We'll see if this improves or not. If not, I think I'm going to have to request to have her taken off Ben's case. We'll see though. I'm not ready to do that yet.


But I'm getting ahead of myself. Before OT this morning, Ben headed to the playroom while I packed up our room. Yep. We moved. To a much better room. And get this...I even have a REAL bed. Woohoo! I have been warned many times however that this may not last...and we may even get a roommate. Which would totally suck. But if it happens, I'm sure we'll deal.

Ben had PT with Stephanie at 11. Which went fairly well. He needed some convincing to do the crawling part of the program this morning, but in the end did fantastic.

After 3 hours in his wheelchair (either in the playroom or at OT) and then an hour of PT, he was pretty much exhausted. So it was back to our room for lunch and some rest.﻿ Seriously. He's EXHAUSTED. Like he needs to lay right down in bed and watch videos for at least an hour, if not more. He'd go to sleep if I let him...

After lunch, we were surprised with a package. As we opened it, I had NO IDEA who it was from. NONE. On the top, there was a HUGE card. And it wasn't until I opened up the card and saw all the notes from my UFE marking people that I clued in. And I cried. It totally got to me. They all wrote such nice notes to me and Clarence and Ben. Even the people that weren't in Toronto last weekend (when they were all there working without me), sent notes by email to include. (To those of you that have no idea who I'm talking about, here's some clarification. These are a group of 10 or so people that I've worked with each fall for up to 10 years. And although we are scattered across the country and only get together a few times each year, we are EXTREMELY close. EXTREMELY.) And the gift they got for Ben???? PERFECT! It's "Om Nom"...the frog from his favourite ipad game, "Cut the Rope"! He loved it so much that we had to take it everywhere we went for the rest of the day. 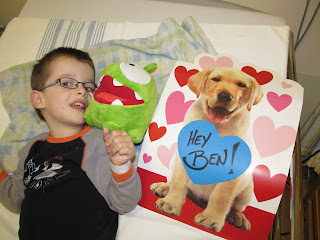 Including playroom! Where it was time to break out the musical instruments! 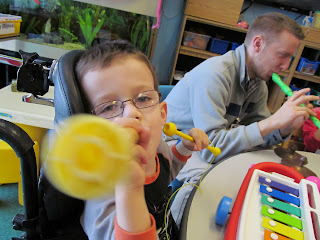 And then...here comes Stephanie (PT) with Ben's standing frame and a brand new dragon!!! She knows my boy well. He wasn't at all freaked out about being put into this strange contraption. He is completely strapped in and doesn't have to really use his muscles to stand, BUT this does force his heels down WHILE his knees are straight, therefore stretching both calves and hamstrings. He will spend up to an hour each day in his stander. 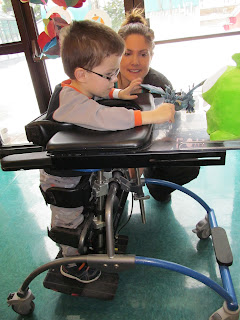 Then we were off for his second PT session of the day. Where he moved on to STANDING...with just a bit of help from Stephanie. Pretty awesome, eh? 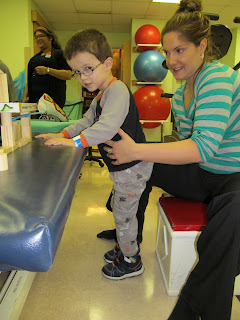 Stephanie really knows how to motivate Ben. For this part of the session, he made a house for his new dragon. I love it! 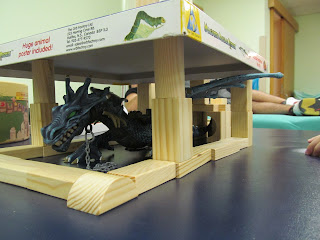 He also got to try out his new braces today. They needed a bit of adjusting, but will be all ready for us in the morning. Ben LOVED them. Which is a good thing. He has to wear them 24 hours a day. Yep. He has to wear them to bed. But he doesn't complain about that at all.

So a busy day.

A commenter asked me on an earlier post when Ben's intensive PT starts. Well. It started from the moment he got here.

You have to understand that this surgery renders you basically like an infant. Ben cannot do any of the things that he could do before. Like roll over, sit, crawl, pull to stand, etc. Not any of it. He has to completely relearn how to use his body...without spasticity. Luckily Ben has quite a bit of strength so hopefully by the time we go home in 5 weeks, he'll be able to do what he did before...only better. And then we build on that. At this point, we are still working up to tolerating being in the wheelchair. After a few hours, he's exhausted and needs to lie down.

In a nutshell, while here, this is what Ben will do each day. 2 hours of PT. 1 hour of OT. 1 hour in the stander. 1 hour in the bike. 1/2 hour in the pool. Plus. He will wear his braces for 24 hours each day. And he'll spend a few hours in the playroom. Sounds pretty intense to me.

So that was our Monday. How was yours?