I'm back! Sorry for the lack of posts, but I've been busy doing things OUTSIDE of the hospital and just haven't found the time to do an update..
Mom arrived early on Tuesday morning. Ben insisted on staying in bed until she arrived so that "she could wake him up". Luckily, I think she was here by about 8am. I stuck around all day Tuesday to "train" mom on everything so that I could feel comfortable being gone most of Wednesday and Thursday. Although she never really felt comfortable enough to get him in and out of his stander or bike, she quickly mastered transfers from his bed to his wheelchair as well as transfers to the potty seat. So that was all that was really needed.

On Tuesday morning, there was actually a ventriloquist scheduled to put on a show for the kids. Here is a cute photo of Ben and Nora Lee waiting for the show to get started. 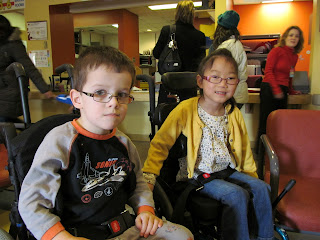 Unfortunately, the show was pretty poor. It really wasn't good and I think everyone just felt a little bit uncomfortable because the guy just wasn't funny. After about 10 minutes, Ben asked to leave and Mom and I were happy to oblige him. 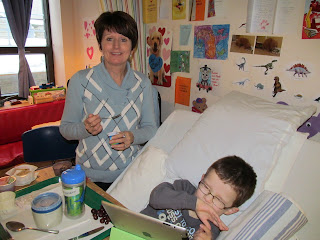 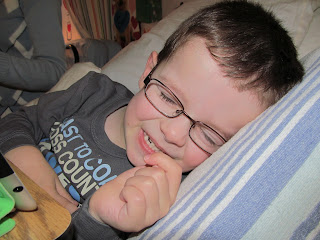 My colleague and friend, Paule, came by the hospital at about 5:30 pm that night to pick me up to take me to dinner at her place, which is actually very close to the hospital. We had a lovely evening chatting and gossiping over a few glasses of wine and a lovely supper.

I stayed at a hotel both Tuesday and Wednesday nights while Mom was here. What a welcome break from the hospital. I did return though for a few hours on Wednesday afternoon. And I was glad I did as I got to meet two Shriner's that are on the Board of Directors. The man on my right is actually Armand Lono, the uncle of my favourite High School teacher, Robin (Lono) MacDonald. And the one on the left is the head of the NB Shriner's. What nice men! It was so nice to meet them. I had hoped to get a photo of Ben with them, but that was a no-go. Armand is actually reading this blog (Hi Armand!)...it seems almost everyday I find out that someone else is following us on this journey. 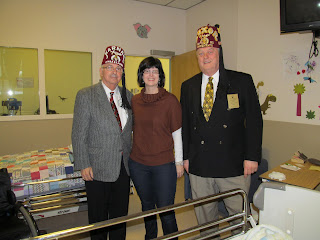 Wednesday evening brought more socializing with Paule. She was so great to entertain me two nights in a row. She picked me up again at the hospital and off we went to get take-out to take back to her place. Well...after getting lost a few times, we finally found the place (with the help of my iPhone) and headed back to her place for more wine, food and conversation.

I did manage to get some shopping in on Wednesday and Thursday. And some damage was done to the credit card at the Apple Store as well as Lululemon.

It was hard for me to stay away from Ben for too long though and I was back at the hospital by about 2pm on Thursday afternoon. I was able to go to his swimming session and hear Stephanie rave about all the wonderful progress he made while I was gone. I love hearing her sing his praises! In the morning PT session, not only did he do some knee walking (while holding on to one of her hands), he also took his longest walk with his canes since the surgery and was awarded with another surprise from the magic mailbox. And in the pool this afternoon he even took some independent steps! I just wish I had had my camera along. Tomorrow I will for sure!

Daddy and Daniel arrive tomorrow afternoon. I was telling Stephanie this and she offered to have Daniel join her and Ben in the pool during his session tomorrow. I can't wait for that.﻿

So that just about covers the last few days. It was great to have mom here and I know that she enjoyed herself. Surprisingly, this hospital is really a fun place to be. Mom left us after supper tonight to head to a hotel near the airport so she can catch an early flight tomorrow morning to join Dad in Florida.

To end tonight, I'll leave you with a photo of Ben's incision. There wass a little bit of stickiness left from his dressing and one steri-strip left when I took this photo yesterday. That is now gone. Looks pretty good, eh? 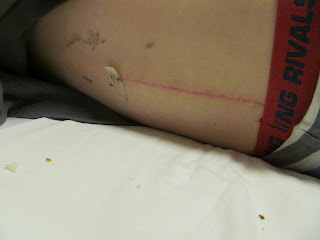