Casting so far has been pretty good. He wore his first sent of casts for 5 days. We took them off the on Labour Day morning. He really didn't want me to take them off, but was OK once I was finished. He had quite a bad blister on his right foot and a small blister on his left. I was surprised to find them since he had tolerated the casts so well and hadn't complained once about them. He even slept great every night with them on.

Standing / walking with the casts went pretty well too. Here he is standing at his train table in his bare belly (he LOVES having a bare belly): 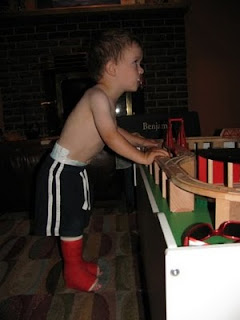 We went back in on Wednesday to have another set of casts put on. They were quite surprised that he had blisters. Apparently it's fairly uncommon to get blisters...who knew? After some discussion they decided to just do his left foot and leave the right one to heal. Ben was not impressed that he only got one boot this time!
His physiatrist took measurements of both his hamstrings and calves. At this time, I don't understand the measurement stuff as much as I'd like to. I do know that he is improving. I plan to get our Private PT to go over the measurement stuff with me this week and I'll post more on it once I understand it better.
We only kept that cast on for 2 days. I was scared that the small blister might get worse and the most change happens in the first 24 to 48 hours. Plus, having just one cast was more difficult than having two. Walking with just one was much more difficult for him since he was lopsided.
We head back in on Wednesday this week and hopefully they'll cast both feet this time.
I have to say that casting is nowhere near as bad as I thought it would be. He has tolerated it extremely well with absolutely no complaints. I do think that he's experiencing some muscle weakness. He seems to have a better gait when using his walker, but seems to tire more quickly.
Our Private PT returns this week after being away for the entire summer. I'm anxious to hear her opinion on how Ben is doing and what the Botox and Serial Casting has accomplished so far.
Posted by Cary at 7:29 PM