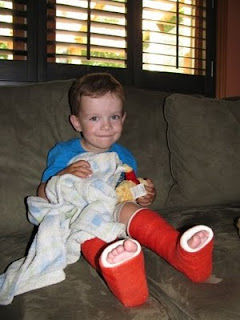 So here's my Ben with his new "boots" as he likes to call them. The day went really well and Ben was a trooper as usual. He always amazes me how well he does with stuff like this.

It took about an hour for the PT to do both casts. And he was happy to watch Dora while she worked away. It actually worked out well, because he now has red boots "just like Boots".

These are fibreglass casts. So they'll stay on until Monday and then we'll take them off ourselves. He'll have Monday night, all day Tuesday, and Tuesday night cast-free and then he'll get his next set on Wednesday. We're hoping that he won't lose too much muscle strength by having that time off in between casts. He'll probably have 3 weeks of casting.

The PT said that the most benefit occurs in the first 24 to 48 hours. So if he's complaining and we can't get him to stop, then we should take them off. So far though, he really likes them and there hasn't been any complaining at all.

He's not allowed to walk or stand on them today, but can starting tomorrow. He should be able to walk with his walker even with them on. I'm really hoping that's the case.

So really...today was no big deal. No shots, no anesthetic, no crying. Easy-peasy. Now we just look forward to RESULTS!
Posted by Cary at 4:00 PM