This weekend was fairly low-key. It is quite cold out and getting around with Ben's wheelchair on horrible sidewalks meant that we mostly stayed in. That was OK though. We were so worn out from Friday that it was a welcome reprieve.

We finally managed to get Ben to the pool on Saturday. Was he ever excited! 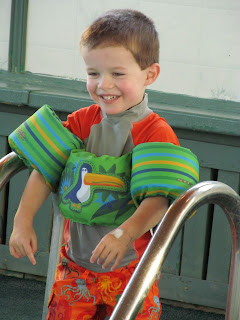 He was so happy to get into the pool...even though it was pretty chilly. 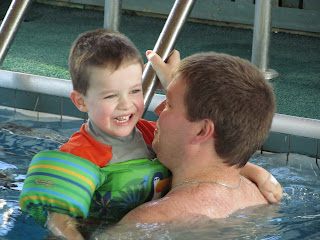 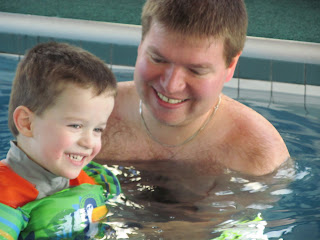 And for the first time ever, he insisted on swimming "all by myself!" He continually told Daddy to "stop holding me!". 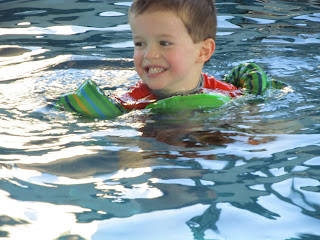 Later in the afternoon, we did manage to make it out to the mall nearby. We had supper at Nickels and got a few groceries. But that was about all Ben wanted to do so we headed back.

Today was another restful day. We spent more time at the pool, watched movies and football (go Pats!) and had St. Hubert take-out. 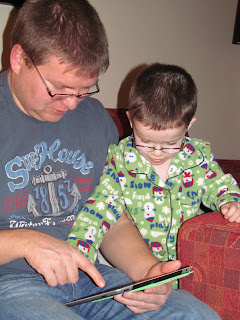 We did mention to Ben that tomorrow we need to go back to the hospital for more appointments. To which he asked "what are they going to do to me tomorrow Mommy?". Luckily, I was able to explain that tomorrow all he has to do is show off for everyone. Tomorrow Ben has 2 physiotherapy (PT) appointments. One at the Children's Hospital as the PT's there will be the ones to work with him first as he is recovering from surgery. And another at Shriner's where he will be filmed to show exactly what his abilities are pre-surgery. Plus, these PT's are the ones who will work with him during the 6 weeks of intense rehab.
So that was our weekend. Now the real "fun" begins!
Posted by Cary at 9:38 PM