I just knew when I posted on Thursday night that I wouldn't get around to posting again til Sunday. And yep...here we are...Sunday night. On the eve of the start of Week 5. Just 12 days til we go home!


Due to some flight booking issues, Clarence and Daniel actually flew up to Montreal late on Thursday evening. It was too late to come by the hospital when the got in, so they went straight to the hotel. It was great though as they were here at Shriner's by about 9:30 in the morning, just after Ben's OT session.

So off we all went to the playroom. I continue to be amazed at the child life workers there as well as the volunteers. The volunteers are simply amazing. There a number of volunteers that volunteer once or twice every single week and just come to the playroom to help entertain the kids. These volunteers make the stay at Shriner's so much better for both the kids and the parents. Really, I don't know what I'd do without them.

The volunteer on Friday mornings is Laura. She is great. Really great. And Friday's activity was to decorate pillow cases. You can see Ben is hard at work and Daniel is busy talking (as is usual for Daniel):﻿ 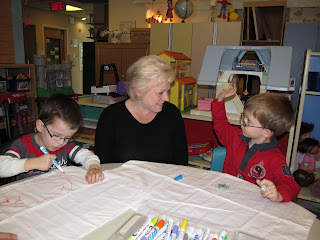 While we were in the playroom, our now close friends, Nora Lee and her mom, Nathalie, came by to say their good-byes. Nora Lee had her surgery 2 weeks before Ben so it was time for them to go home. I was really sad to see them go. It was so nice to have someone else there that was going through the exact same thing as us. Luckily, Nathalie thought to get a photo of us together! 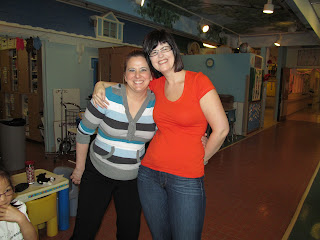 After playroom time, it was PT time. So off we went as a family. Daniel and I only stayed for a few minutes, but before we left, I got this photo of Ben working hard with the ladder. In this exercise, Daddy is holding one hand while Stephanie steadies his hips. He has to take big, long steps to get through this one. 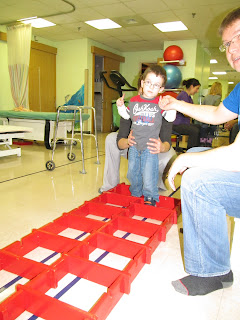 Shortly after the PT session started, Daniel and I headed off to the hotel. Ben still had a full day on Friday so Daddy stayed back with him. It was great for Clarence to get a chance to see what Ben does everyday. Also, he got this great video of Ben climbing the steps for the first time:

After Ben's full day of therapy, they joined us at the hotel. Due to the start of a snowstorm and some heavy traffic, they were a little late arriving, but still made it in time for all of us to have dinner together. And then of course, it was "Cut the Rope" time...here they are in their jammies (each playing on a separate iPad...yes, we're spoiled): 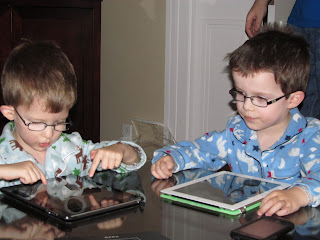 And then, for the first time in just over 5 weeks, they went off to bed together! It was late by the time they got to bed that night (like 9pm...which is 10pm for Daniel) but they still laughed and giggled and talked with each other for at least 20 minutes. It just warmed my heart to hear them... 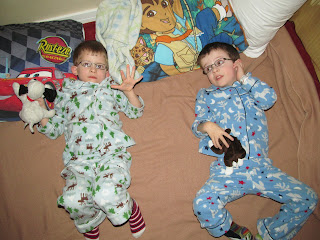 The rest of the weekend was spent at the hotel. There was a snowstorm in Montreal and we did really not feel like venturing out in it. So we spent a lot of time in the pool. Ben LOVED it! And never stopped smiling! 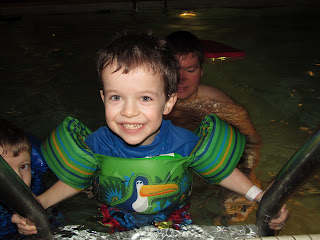 Daniel was so happy to have Ben and Daddy there with us! 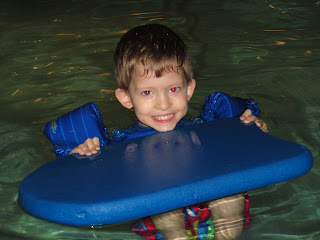 When we weren't at the pool or out finding something to eat, we just hung out in the room. Here they are watching Toy Story (I think). 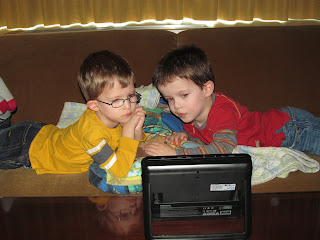 The hotel even had bathrobes for kids! Check Daniel out! 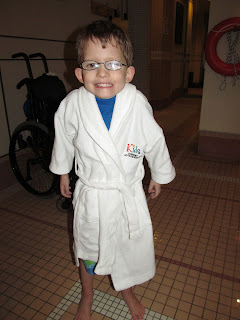 After the pool, the boys would try and stay naked as long as possible. Funny, how they'll run around naked forever, but when they go to the bathroom, they have to have PRIVACY! Here they are playing "Cut the Rope" naked! 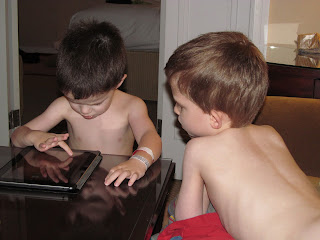 And, my favourite picture of the whole weekend. Me and my boys all cuddled up before bed. I have missed these moments so much. 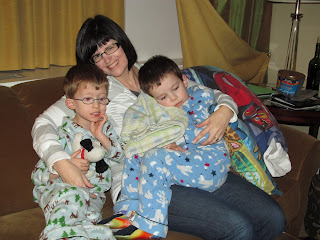 To be honest, I was a bit worried about how the weekend would go. Ben and Daniel haven't spent much time together lately and I was worried about the transition back to being together (especially in a smallish hotel room). I shouldn't have worried. There was very little fighting and mostly a lot of giggling and loving on each other. It was so nice to finally have all 4 of us together for 48 hours straight.

Clarence and Daniel flew home early this afternoon so Ben and I headed back to Shriner's around lunchtime. Ben was very unhappy that he had to go back. There were a few tears. But once we were back, he was fine. We did some homework (biking, stander time, walking in his walker, cutting and colouring for OT, and stretches). And managed to put in the day.

I am now ready for Week 5 to get started. I feel like I can see the finish line so I'm picking up speed! ﻿
Posted by Cary at 9:43 PM