Sunday night again.  Our last Sunday night.  I'm excited but a little down tonight.  Just tired of being in this hospital I guess.  And it was rough bringing Ben back tonight.  I thought it would be OK...maybe better than last week.  Nope.  No such luck.  Much worse.  Much, much worse.  Much kicking and screaming.  I'm sure the hotel employees thought we were torturing him.  Ah well.  That's over.  He's now happily in bed watching Kipper.

But...before I tell you about our last weekend in Montreal, I should tell you quickly about Friday.

Friday was a good day.  Mostly because it was so short.  Ben had no OT on Friday, and Stephanie moved some appointments around so his sessions were at 9am and noon.  We were done by 1pm and gone by 1:30.

I can't remember exactly what we did in Friday's sessions, but I do know that Ben went on the treadmill for the first time since his surgery.  It was awesome.  I love his steps.  And I'm really happy that we're going to be getting him a pediatric treadmill to use at home...we just have to wait til May (thanks Amy!).


So...like I said, we were out of here by 1:30.  My brother Jeff and his family had arrived at the hotel around 12:30...about the same time as Clarence and Daniel.  So Clarence left Daniel with Sheryl (my sister-in-law) and he and Jeff came over fto get us (so much easier than a cab!).

Off we went to the hotel to await my sister's arrival around 2:30.  And then we were off to the pool! 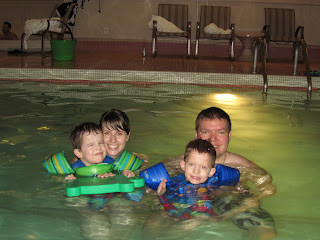 After supper at the hotel restaurant, the boys were ready for their jammies!  Here they are playing with their cousin Lucy's DS:﻿ 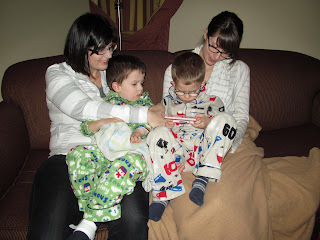 After the boys went to bed, it was time for the rest of us to play some cards and just basically hang out.  Here I am with my sister, Virginie (AKA Ginnie) and my brother, Jeff. 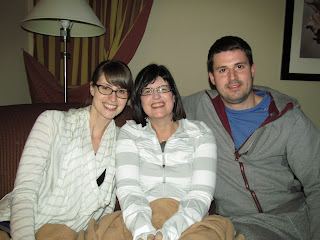 Saturday brought more pooltime in the morning.  In the afternoon, we all headed off to the biodome.  I was grateful that my brother was there with his SUV.  It meant that Ben could travel in his car (in his carseat) and the rest of us could just take the metro (which is really not wheelchair accessible).  Here is my sister and I: 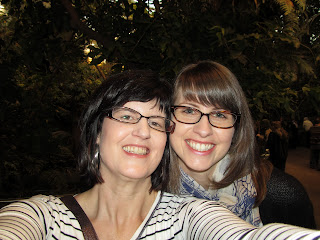 My brother's family (all decked out in their Canadiens gear in preparation for the upcoming game that night): 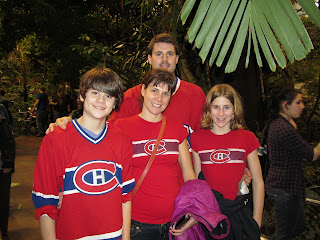 A great family shot of us: 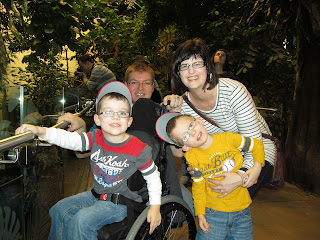 Saturday night was pretty low-key for most of us.  My brother and my niece Lucy got tickets for the hockey game (Canadiens vs. Leafs) but the rest of us just chilled in the hotel room.

On Sunday, we all enjoyed the breakfast buffet at the hotel.  Once that had settled for awhile, it was time for the pool again.  But probably the most exciting part of the weekend for Ben came next...we went to the Montreal Science Centre which has a temporary exhibition of dinosaurs!  Check out this huge T-Rex! 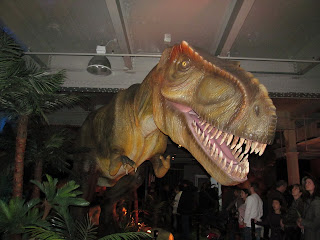 Another family shot...with a T-Rex bearing down on us! 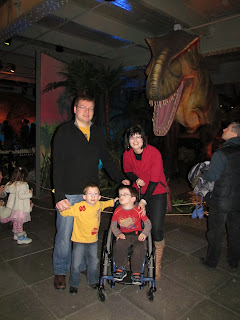 After the science centre, it was time for Ben and I to head back to the hospital.  My sister is currently on a plane back to Calgary and the rest of the family will leave early tomorrow morning.

So our last weekend in Montreal draws to a close.  And Week 6 starts in the morning.  Let's get on with it. I'm ready to go home.
Posted by Cary at 8:44 PM