Ben had a visitor this morning!  Fletcher, a classmate from preschool, was in Montreal for March Break.  Apparently, as soon as his parents told him that they were going to Montreal for vacation, he was like "That's where Ben is!".  So, they were really nice to take time out from their family vacation to come and visit us.

When they arrived, Ben was in the playroom, but he quickly got back into his walker to show them all around the hospital.  I couldn't believe how long and how quick he walked (with great steps).  He showed them the family area, then we went downstairs to the clinic to show them the fish and the frogs and then all the way back upstairs to show them our room.

Here is Ben and Fletcher making funny faces for the camera!﻿ 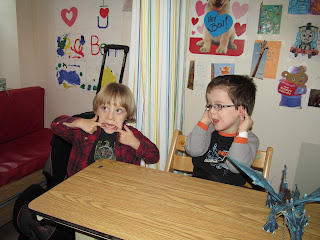 And now hugging it out!  How cute are they! 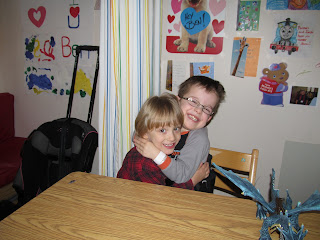 The rest of the day was pretty exciting too.  At his PT session in the morning, he walked quite a bit just holding on to one of Stephanie's hands: 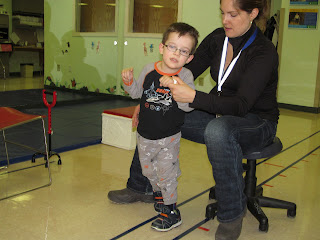 He stood independently for 25 seconds!!  And maybe even took an independent step or two.  Check the video out!


I would say that he has now "officially" passed his pre-surgery abilities.  So now any progress we make is just so much fun becuase it's all new stuff!