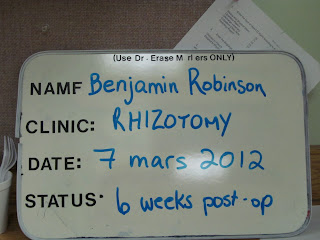 Although Ben's SDR happened 6 weeks ago (I can't believe we are already 6 weeks post-op), it is only today that I consider us to be officially in the AFTER...as in AFTER SDR.  It was like up to now, he was just trying to regain the abilities that he had lost.  Yes, he was doing all those things BETTER than before, but wasn't really doing anything super-new.  Now, he's starting to do actually NEW things...things he couldn't do before.  Like stand on his own for 25 seconds.  And likely very soon, some independent steps.

And today was the day where his AFTER video was filmed.  When he was here for the SDR evaluation in October, they took a video of his abilities then.  And now, it was time to show what he can do now.

So...here is his BEFORE video:

Now...check out these AFTER videos:

First off, walking in his walker with his shoes and braces on:

Secondly, here he is walking with his canes with his shoes and braces on:

And I've saved the best for last.  Here he is walking with his canes in his bare feet.  This is the first time I've seen him walk barefoot since the surgery and I was thrilled that he kept his heels down so well.  I had been warned that many kids still walk on their toes just out of habit.

I can say with absolute certainty that this surgery was the absolute right choice for us.  There is no question in my mind.  And we are only 6 weeks post-op....Stephanie says that we should see the biggest gains between 6 and 18 months post-op.  I can't even imagine what he's going to be able to do come the summer of 2013.

So yeah.  SDR was right for us. 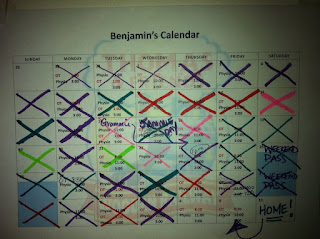