Now that we are really getting towards the end of our stay here at Shriner's, there just isn't as much to tell everyone at the end of the day. Ben continues to work hard and make progress but mostly our days are all the same.

We don't use Ben's wheelchair at all anymore (at least not at the hospital...we will definitely need it once outside the hospital).  He gets everywhere either in his walker or on his bike.  I try to get the walking done in the morning before he wears out and then move on to the bike in the afternoon.

He is pretty exhausted tonight though and has been laying in his bed since we got back to the room at 4:30.  I even made an exception and fed him his supper in bed tonight.

Here are a few pictures and videos from the last couple of days:

Waiting for Stephanie to arrive for physio...playing games on mommy's iPod: 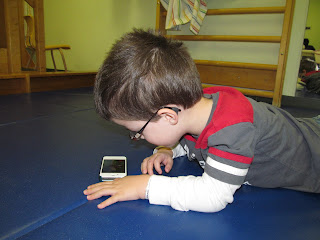 Walking with Stephanie...on his way to the magic mailbox: 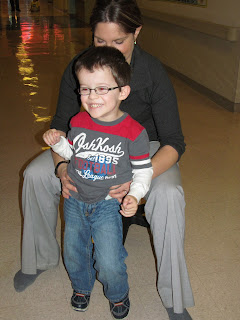 More playing on Mommy's iPod while on his bike waiting to go to the pool: 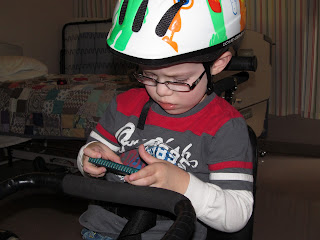 For his walking practice today, Stephanie was pretty clever.  We were all secret spies.  Ben wore a camouflage sweater, I wore my camouflage hat and Stephanie wore her sunglasses.  This way no one would be able to see us as we snuck around to Dennis' office to see if he was sleeping on the job.  Dennis is the videographer here and does all the before and after videos of the kids.  He did one when Ben was evaluated in October and he'll do another one of Ben next week (as well as every time we come back for follow-ups...at 6 months, 1 year, 2 years, 5 years, 10 years and 15 years post-op).

So off we went to find Dennis.  At first, he was walking behind a big giant wheel:

And then he had to walk backwards for part of the way:

When we finally arrived at Dennis' office, yep, we caught him...with the lights off, feet up and snoring (he's great to play along!).  So Ben sprayed his with a squirt gun.  Too fun!

The highlight of Ben's day today...a dog named Mia came for a visit.  She was actually the dog of another patient (and shouldn't even have been in the building) but Ben was IN LOVE.  She was adorable and luckily enough, Ben didn't even have an allergic reaction to her.  Ben cried great big sad tears when she had to leave. 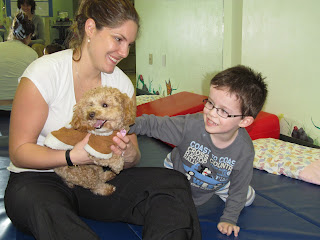 This is where he has been since 4:30 this afternoon (although he did sit up for about 15 minutes to eat supper, which I fed to him). 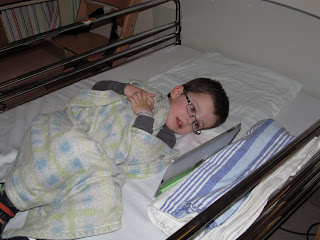 We booked our flights home today!  We fly home at 1pm next Friday afternoon...so we'll be home by about 4 o'clock.  I can't wait to be home.  50 days away is just way too long to be away.  I can finally see the light at the end of the tunnel.

And the weekend arrives again tomorrow.  Our last weekend here...and it should be the most fun with Daddy and Daniel, my brother Jeff and his family, and Aunt Ginnie all arriving tomorrow afternoon.  Ben's schedule has been pushed up tomorrow so we should be out of here by about 1:30.

Have a great weekend everyone!  I'll post again on Sunday night with lots of great pics of our weekend.