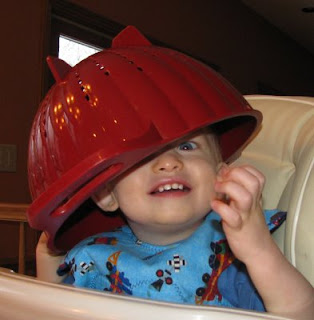 I don't want this blog to be ALL about Ben and CP. I want at least some of it to be about the rest of our world. So let me think about what to tell you about Daniel.
Daniel is Twin A...so my first born. I'm not sure that matters. Everyone seems to want to know who's the oldest. Yes, Daniel came out a whole 2 minutes before Ben, but does that really make him "older" than Ben? I don't think so.
Daniel was the healthier of my 2 preemies. That said, he was released on the same day as Ben. He had tons of A's and B's...especially B's. He never got really sick but was super, super slow getting well enough to go home. We think he was waiting for Ben.
For some reason, we don't call Daniel anything but Daniel. Not Dan. Not Danny. He is very rarely called Dan the Man. Benjamin has many nicknames. We call him Ben mostly. He also gets Benny, Mr. Ben and for some reason Benny-Ha-Ha. I don't know where that one came from.
Daniel is very much a mommy's boy. That mostly stems from his reflux days. Daniel had very severe reflux. He was discharged from the NICU with reflux and was on Zantac for it. We continued to up his dosage as he put on weight (and consequently the symptoms would return). When he was 5 months old (3 months corrected) the Zantac stopped working for him. He was put on Prevacid and that helped a little. We thickened my breast milk....which did nothing. We switched to Alimentum which also helped a little. He was impossible to feed and threw up almost everything that we did manage to get into him (this continued for about 4 months). Because he was so difficult to feed, I became the only one who was able to do it. So I ALWAYS fed him. Consequently, he got very attached to mommy.
Daniel is also quite tiny (we also contribute this to the reflux). He is just 21 lbs. In Canada, he needs to reach 22 lbs before I can turn his carseat around. Ben reached 21 lbs. months and months ago but his carseat remains rear-facing since I want to turn them around together.
Daniel loves books, especially Goodnight Moon and Goodnight Gorilla. If Daniel had his way, an adult would carry him around constantly and go wherever Daniel "points" to. Daniel loves cars and loves to watch them drive by the front window. Unfortunately for Daniel we live on a court so there are not many cars that go by each day. Daniel loves to kiss Ben. Daniel also loves bananas. We have a few books that have a picture of a banana in them. When he sees the picture of the banana, he starts nodding and pointing to the cupboard where we keep the bananas. He won't stop until we feed him a banana.
When I'm feeling blue about Ben, I also feel blue about Daniel. I feel bad that Daniel doesn't have a typically developing twin brother. I hate that Daniel won't have a brother to play sports with and to climb trees with. Sometimes I cry for what CP has taken from Daniel too.
Posted by Cary at 9:27 PM