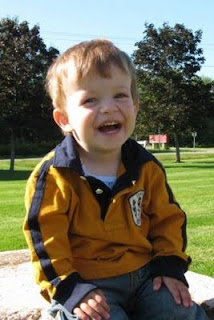 One year ago today we were told that Ben had Cerebral Palsy. It was exactly one week after his 1st birthday. I gave the details of that day in an earlier post.

As I look back now, I would say that we were pretty blind-sided when the neurologist asked if we knew that Ben had CP. Being accountants and not medical-professionals, we didn’t even know what CP was. We knew that Ben was very delayed but I really think we thought it was just a lingering preemie issue that would eventually resolve.

The first few months were filled with anger, sadness and an overwhelming need for more information. I felt like I was a hamster in a cage going round and round on a wheel. I would go online and read everything I could about CP, its effects and its treatments. This would usually result in severe crying displays or outbursts of anger and “why-me’s”. The only thing that would have any sort of calming effect was seeing Ben himself. He is such a happy child that to see him would automatically lift my spirits.

The next stage for me was one of denial. Ben seemed to be making progress. And I went back to MY original diagnosis of “this is a just a lingering preemie issue”. Ben had his first MRI in January and I thought for sure that it would show nothing. Alas, I was wrong, It showed that Ben has PVL. A very large percentage of infants with PVL will develop Cerebral Palsy. I think this brought me out of the denial and back into reality.

After this, I think followed acceptance. I was still often sad. Especially when seeing other children (especially twins) around the same age as the boys. I was still bitter. And I still felt “jipped” out of the normal baby experience and even the normal twin experience.

But this is slowing getting better. Mostly likely because Ben in doing so well. He now crawls on all fours, can get in and out of sitting, can pull to stand and even cruise (with help). I think maybe the hardest part of getting the diagnosis last year was that we still didn’t know much of what Ben would eventually be able to do. We didn’t know if he had speech or what cognitive delays (if any) we could expect. We didn’t know where he fit on the severity scale.
We now know that he does have speech (I think he now has over 70 words). We also know that he's pretty smart too. And on the severity scale, he's not exactly mild but not moderate either. If I was describing a steak, I'd say he's medium-rare. And even though we'd love it if we could say his CP was mild, we're pretty happy about where he is.
Posted by Cary at 8:46 PM