As I was watching Daniel and Ben play together today, I noticed that the differences between them (development-wise) weren't as pronounced as they used to be. Six months ago, all the pictures that I have of them playing together looked like this: 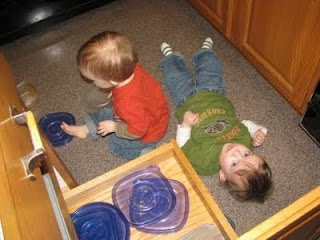 Basically, Daniel was usually sitting (sometimes standing) and Ben was laying on the floor. God, how I hated that he was always lying on the floor.
But, that's not the case anymore. He has come so far in the last six months. He can now pull to kneel, pull to stand, crawl on all fours, w-sit, get into w-sit, climb a few stairs and cruise (with a spotter). How amazing is that! Just six months ago, all he could really do for gross motor was army-crawl, roll-over and sit unassisted. It shocks me how far he's come in the last six months.
And this doesn't even take into consideration all the stuff that he's figured out for fine motor and speech.
So now, my pictures look more like this: 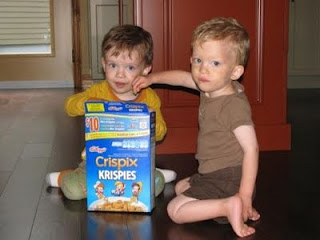